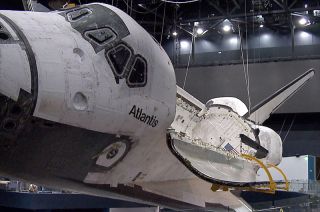 When it was flying in orbit, space shuttle Atlantis' payload bay was opened to deploy probes to the planets, send satellites circling the Earth, and deliver the parts to assemble a space station.

Now that it's retired and being readied for museum display, the orbiter's cargo hold has been opened one last time — not to launch something out, but to welcome the public to look inside.

It took about a week for the specialists working at NASA's Kennedy Space Center Visitor Complex in Florida to fully open Atlantis' payload bay, though most of that time was spent preparing for the few hours needed to swing back each of the 60-foot-long (18-meter) doors.

NASA designed the bay to be opened in the microgravity environment of space; when being prepared for the next launch, the space agency used a custom rig to support the doors' weight and cradle their fragile hinges. At the visitor complex, workers used large metal clamps, suspension lines and pulleys to get the job done.

"Those payload bay doors [weren't] meant to be opened in one-G [Earth's gravity]," said Tim Macy, director of project development and construction for Delaware North Parks and Resorts, which runs the Kennedy Space Center Visitor Complex for NASA. "Normally they open up in space, no big deal. Here, you really have to pay attention to them."

"They are long doors," he told collectSPACE.com. "They're not very heavy, and flimsy isn't really the right word, but they are very delicate." [Watch: Time Lapse of Atlantis’ Payload Bay Doors Opening]

Complicating matters was the way in which Atlantis has been mounted for display. To give the public a clear view into the cargo bay and recreate the appearance of the shuttle when it flew through space, Atlantis was raised 30 feet (9 meters) into the air and then angled 43.21 degrees to one side. Even NASA had never tried opening the bay with the shuttle in such a position.

As time lapse imagery of the doors opening shows, workers used cherry pickers to keep a close eye as the empty bay was exposed. The starboard, or right-side door was first to be opened on May 7, followed by the port door three days later.

Not that the job is now done, as of Sunday (May 12), the guy-wires supporting the doors have been strung from the ceiling, but the suspension lines used to open the bay still need to be removed as do the yellow metal clamps and support bars (or strongbacks) used to steady the doors.

Currently inside the payload bay is a lightweight replica of the shuttle's external airlock and the real orbiter boom that astronauts used to inspect Atlantis' heat shield for damage sustained during launch. A replica of the Canadarm robotic arm that supported the boom is still to be installed.

The time lapse footage, courtesy of a webcam installed by the visitor complex and compiled by collectSPACE.com, also reveals the work to complete Atlantis' surrounding exhibits inside the complex's new $100 million, 90,000-square-foot (8,360-square-meter) facility.

Workers are installing the glass barriers that will separate visitors from Atlantis (though not by very much) and are starting to apply the signage that accompanies the exhibit of a real shuttle main engine behind the replicas that are attached to the historic orbiter (NASA kept its flight-worthy engines for use with the Space Launch System heavy-lift rocket it is developing for future missions).

Just off camera, construction of a full-scale Hubble Space Telescope is also underway, as is the installation of some 60 related artifacts and exhibits that will help tell the story of NASA's space shuttle program, the International Space Station that it helped assemble, and of course, the history of Atlantis' 33 trips to space and back.

Outside the building, the two full-size solid rocket boosters and external tank that will serve as a 184-foot tall (56 m) gateway to the exhibit continues to rise. Recently, workers used a crane to top off the twin white boosters with their nosecones and erected the metal framework for the tank.

Construction of the "stack" is on schedule to be completed in the coming weeks, in time for the grand opening of "Space Shuttle Atlantis" on June 29.

Click through to collectSPACE.com to see time lapse footage of space shuttle Atlantis’ payload bay doors being opened for display.