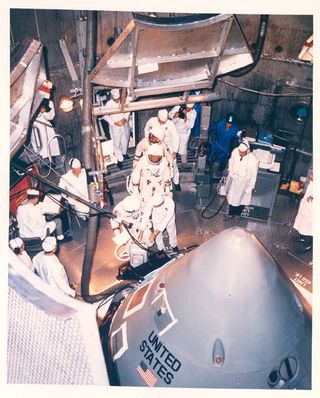 This image shows the Apollo 1 crew in training.
(Image: © NASA.)

In this historical photo from the U.S. space agency, originally designated as the Apollo/Saturn 204 mission, but more commonly known as Apollo 1, this photograph shows the crew in training. On January 27, 1967, disaster fell upon the Apollo 1 mission when a sudden fire broke out in the command module during a launch pad test in which all three of the primary crew perished. Astronauts Lt. Col. Virgil "Gus" Ivan Grissom, Lt.Col. Edward Higgins White II, and Lt. Cdr. Roger Bruce Chaffee died quickly in the tragic accident.

An investigative board was promptly set up to examine the accident and identify the cause of the fire. The final report gave the results of the investigation as well as detailed suggestions for major design and engineering modifications, revisions to test planning, manufacturing procedures, and quality control. With these adjustments, the Apollo program became safer and successfully sent astronauts to the Moon.