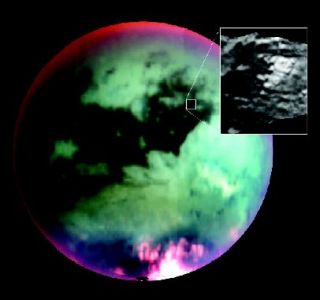 A false-color infrared mosaic of Titan show features not visible to the eye: atmosphere (red); surface (green and blue). The inset shows an a prominent circular feature thought to be a volcano with flows extending westward. Image
(Image: © Nature/Cassini/NASA/ESA/Sotin et al.)

The Cassini spacecraft studying Saturn and its satellites made the first of four planned Titan flybys Tuesday in a search for subsurface oceans.

The potential of a subsurfaceocean, possibly beneath a sheet of methane-rich ice, factors greatly forastronomers hoping to pin down how Titan replenishes the methane in itsatmosphere.

"Methane is only around for a shorttime geologically," said Gabriel Tobie, a researcher with the University ofNantes in France. "The timescale is somewhere between 10 and 100 millionyears."

In a study detailed in the March 2issue of the journal Nature, Tobie and his colleagues found that Titan'smethane is likely locked in ice covering an ocean of water and ammonia, Tobie toldSPACE.com.

Methane makes up about two percentof Titan's thick,predominantly nitrogen-rich atmosphere, and is apparently replenished overtime through outgassing since it is destroyed by sunlight, he added.

BeforeEurope's Huygens probe landedon Titan last year, astronomers believed the moon's methane resided in a liquidhydrocarbon ocean. Huygens' imagesof the surface found no signs of an ocean, but did suggest that liquidmethane once etched gullies across Titan.

"Finding the subsurface ocean willnot give us direct evidence of the outgassing of methane," Tobie said, addingthat a subsurface ocean covered in methane-rich ice is predicted by his study."But it will help us put constraints on our model."

The latest event occurred about 500million years ago due convection within its ice crust, according to the study.Convection in Titan's core also prompted a methane event about two billionyears ago, with the first outgassing occurring just after the moon formed, thestudy suggests.

Methane locked within ice on Titancould be freed by a cryovolcanic - or ice volcano - event, such as thatsuggested in a 2005study, Tobie said.

Data from the Cassini orbiter's future Titan flybys, redoubled modeling efforts, and comparison between the twowill be vital for astronomers studying the moon's thick atmosphere.

Arvydas Kliore,team lead for Cassini's Radio Science Experiment,told SPACE.com that scientists areuse slight differences in the probe's radio signals to Earth to make precisemeasurements of Titan's shape and gravitational field. The measurements aretaken at different points in Titan's orbit around Saturn - from its mostdistant to its closest - to see how much the moon's shape flexes over time, headded.

"The shape would change more [with asubsurface ocean] than if it's just a solid body," Klioresaid of Titan.

Cassini took its first two gravityreadings during the Titan flyby, the 11th of the mission, which ended onFeb. 28. Additional measurements will be collected during Cassini's22nd, 33rd and 38th Titan flybys - the last ofwhich is set for 2008 - to round out the experiment, Klioresaid.