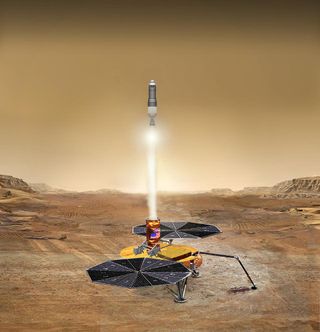 A rocket takes off from the surface of Mars with precious samples of Martian soil to return to Earth. This is the highest priority scientific mission in planetary science this decade and currently impossible given proposed budget cuts.
(Image: © NASA photo)

If you have ever been moved by a Martian vista, awed by the vast, multicolored clouds of Jupiter, or humbled by the sight of the pale blue dot of Earth peeking through Saturn's rings, you’ve enjoyed the fruits of NASA’s planetary exploration program.

But, if you haven't taken a minute to write your representatives in Congress in support of planetary science, you’re a silent witness to that program's impending collapse.

We live in a golden age of solar system exploration. NASA has spacecraft from Mercury to the very boundary of interstellar space. This is all due to the Planetary Science Division within NASA, part of the larger Science Directorate. It was this division that sent Curiosity to Mars and Cassini to Saturn. In two years, Pluto will transform from a blurry sphere to a world, a place, thanks to the New Horizons spacecraft. Our current bounty results from decades of steady investment in the planetary exploration program.

But, for reasons not entirely clear, planetary science is no longer a priority at NASA or the White House. Despite remarkable successes and unparalleled feats, culminating in Curiosity’s Sky Crane landing on Mars, this program faces a crippling cut for the second year in a row while other programs within NASA are maintained at steady levels.

If those cuts come to pass, the decade will find us without replacements for missions that age and die. There will be no missions farther out than Mars. NASA will go "radio dark" in most areas of the solar system. This isn’t easy to fix. It takes a decade to plan a major mission and to develop the technology and human capital necessary to ensure its success. Deep cuts now leave their mark for generations to come. [Planetary Science Takes a Hit in 2013]

I know it's easy to ignore calls to write to Congress. I get messages all the time asking me to write for one issue or another. It's easy to dismiss them as unimportant or to rationalize them away as meaningless.

But writing for planetary science is different. The problem isn’t politics, but awareness. Both parties generally support solar system exploration. But other areas of NASA tend to dominate the political discussion. A relatively small, successful, healthy program like planetary science can get lost in the shuffle.

The other advantage is that planetary science is affordable: A budget restoration to $1.5 billion per year is less than 9 percent of NASA’s total budget and would enable a robust program that achieves the major scientific goals of the decade. This is a relatively small amount of money by federal standards (money could be moved around from other areas of NASA, for instance, or a small amount could be added to the top-line agency budget).

But, the best reason you should write is that your letter fits into part of a larger plan. The Planetary Society pounds the pavement in D.C. We have a lobbyist who speaks for planetary science. We travel to Congress many times a year and have developed relationships with legislators and with NASA. You’re not just writing a one-off letter, you’re joining a movement. We provide the crucial follow-up that builds off of your statements of support.

I want to be alive when our first robotic mission lands on Europa to scout the icy moon for life. I want to see a boat sail the methane seas of Titan. I want to have the best laboratories in the world examine samples of the Martian soil for hints of life. I bet you want to see those outcomes, too. But, we can't just expect them to happen. We have to make them happen. Future generations will thank us.

So do something about it. Don't be silent and watch our presence in the solar system slowly wither away. Speak up and write your people in Congress. We’ll make sure they hear it.