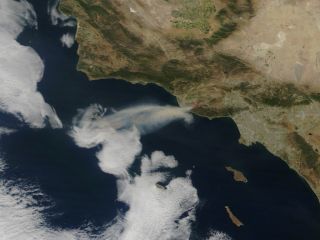 The wildfire that started last week in a hilly area northwest of Los Angeles kicked up enough smoke to be seen from space.

NASA's GOES-West satellite captured this animation of smoke plumes drifting westward over the Pacific Ocean from the Springs fire, which started last Thursday (May 2), according to the California Department of Forestry and Fire Protection.

The animation was created using images acquired by the satellite from 7:15 a.m. to 1 p.m. PDT (10:15 a.m. to 4 p.m. EDT) on May 3. The smoke drifts westward due in part to the strong Santa Ana winds, which helped the fire spread once it started near a roadside. It then spread through scrubland nearby, which provide ample fuel for the fire. Although the cause of the fire is still under investigation, officials have ruled out arson.

Upper-level clouds, which aren't directly affected by the Santa Ana winds, can be seen drifting eastward in the animation, bringing moisture from the Pacific Ocean that ultimately helped firefighters get a handle on the blaze over the weekend, when the humidity was high.

At first the fire appeared to threaten a $1 billion communications site on Laguna Peak, but firefighters protected it and the electrical transmission lines nearby.

As of this morning (May 7), the blaze is 90 percent contained and is expected to be completely contained later today, according to the California Department of Forestry and Fire Protection.

The Springs fire has damaged 15 homes and destroyed 25 other buildings, according to local news station KTLA. At its peak, there were more than 1,800 firefighters battling the blaze, which threatened 4,000 homes. Only minor injuries to firefighters and civilians have been reported, officials said.

The wildfire has charred a total of 44 square miles (113 square kilometers), burning from where it started, several miles inland, all the way to the ocean.

This story was provided by LiveScience, a sister site to SPACE.com. Email Douglas Main or follow him @Douglas_Main. Follow us @OAPlanet, Facebook or Google+. Original article on LiveScience's OurAmazingPlanet.