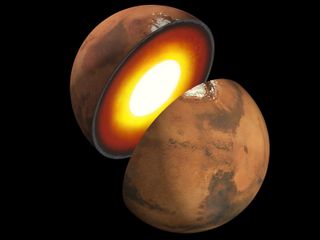 An artist rendition of the interior of Mars. A new study suggests Mars formed from the collision of smaller space rocks than those that created the rocky core of Jupiter. Image added April 30, 2013.
(Image: © NASA/JPL-Caltech)

The violent space rock collisions that gave birth to Mars appear to be surprisingly different from those thought to form the rocky core of Jupiter, scientists say.

The difference comes from variations in the disc of dust, ice and other particles that swirled around the sun in the early years of the solar system.

Researchers said there was a "gradient" in the size of planetesimals — an early stage of planet formation — that orbited the young sun. Planets that were further away from the sun were more likely to grow larger than worlds closer in, they added. [Take a Photo Tour of the Planets]

"This difference can be explained by the snow line," said Hiroshi Kobayashi, a researcher at Nagoya University in Japan, referring to the zone in the solar system where it was cold enough for icy compounds to condense 4.5 billion years ago.

Growing up through crashing together

The solar system came into existence about 4.5 billion years ago, according to today's theories. The sun formed in the center of a swirling disc of debris. As particles and heat streamed out from the young sun, most of the ice and gas in the inner solar system dissipated, leaving small rocky bodies behind.

Kobayashi and his co-author Nicolas Dauphas, a researcher at the Origins Lab at the University of Chicago, ran computer simulations to see how Mars formed under these conditions.

Mars orbits roughly 1.5 astronomical units (AU), or Earth-sun distances, from the sun today. The model divided the planetesimals that formed Mars into four rings, or annuli, that were 1.5, 1.8, 2.2 and 2.7 AUs from the sun, treating the millions of bodies as larger "mass batches" to simplify the calculation.

Next, the researchers followed the evolution of Mars by watching how the planetesimals crashed into one another over time. The collisions varied depending on a few factors: how much gas surrounded Mars, the variability of the bodies' orbits, and the orbits' inclination to the rest of the relatively flat plane of the solar system.

The process is somewhat chaotic, according to the model. The smaller planetesimals can easily lose a significant chunk of their mass when crashing into one another, thus creating even smaller bodies after colliding, the researchers noted.

Some of these pieces stick on to the larger body, while others move away, depending on how they interact with gas in the area.

This means that unlike Mars, which has a core just one-tenth the size of the Earth's, the timescale for creating Jupiter's massive core — which is nearly 10 times the size of Earth's — would be quite lengthy, especially when small planetesimal collisions are considered, Kobayashi said.

"For large planetesimals, fragment accretion is less important," he added. "The growth timescale is too long to produce Jupiter's core within the gas lifetime."

The scientists determined that the planetesimals that formed Mars likely collectively formed in annuli of a hundredth of the mass of the sun. Each of the individual planetesimals had a radius of less than 6.21 miles (10 kilometers).

The smashing and growing process likely produced "tens of Mars-size embryos" swarming between 0.4 AU and 1.5 AU from the sun.

Mars itself, which was orbiting 1 AU from the sun, was probably "scattered" to a distance of about 1.5 AU, Kobayashi said, possibly because Jupiter’s gravity altered the orbit of Mars. The planet shifted orbits due to a resonance with Saturn after the giants formed, according to some theories.

Kobayashi cautioned, however, that the theory of Jupiter moving is still very new and requires further study.

The remaining planetesimals would have had highly eccentric orbits, so they planetesimals could have crashed into other solar-system fragments. Kobayashi's model said it was likely these were blown apart over time.

The research will appear in the July issue of Icarus.