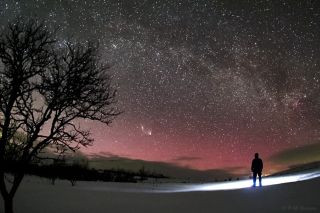 P-M Heden took this image of Comet PanSTARRS and the Andromeda Galaxy from Tänndalen, Sweden. The image was released on April 3, 2013.
(Image: © P-M Heden / Clearskies.se / The World at Night)

Veteran Swedish stargazer captured the illusion of two comets soaring through the night sky in this beautiful photo.

Astrophotographer P-M Heden of The World at Night took this shot from Tänndalen, Sweden. The photo was released April 3, 2013.

While the image appears to look like a double comet, it's actually of the Comet Pan-STARRS (C/2011 L4) appearing with the Andromeda Galaxy, also known as M31. At the time the image was taken, both the comet and galaxy were similar in brightness, visible to the naked and both glowed red from the light of a nearby aurora giving the illusion of seeing double. [See more amazing photos of Comet Pan-STARRS]

The bright alpha star Debeb, located in the constellation of Cynus, is to the right of the image. In the image abo,ve Pan-STARRS and Andromeda galaxy, one can see a true double, the star clusters h and chi Persei.

Comet Pan-STARRS was discovered in 2011 by a team of astronomers using the Panoramic Survey Telescope and Rapid Response System, or PANSTARRS, which is a powerful telescope atop Haleakala in Maui, Hawaii.