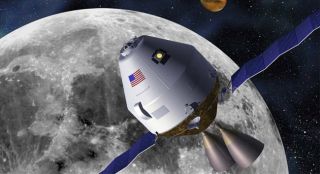 An artist depict's a Lockheed Martin Crew Exploration Vehicle in lunar orbit. The firm is one of two groups vying for a contract to build the new spacecraft for NASA.
(Image: © Lockheed Martin.)

WASHINGTON-- Lockheed Martin Corp. announced Wednesday that it would build NASA's Crew ExplorationVehicle (CEV) in Florida if selected by the space agency as prime contractorfor the multibillion-dollar space shuttle-replacement project later this year.

"LockheedMartin's proposal to do final assembly and checkout of the Crew ExplorationVehicle -- CEV for short -- reinforces what we believe is the absolute advantage Floridahas to offer as a location as we look toward the maturing of our nation's spaceindustry," Jennings said.

Florida hasput together a $45.5 million incentive package for locating CEV workin the state that is awaiting approval by the state legislature.

Theincentives include $35 million in infrastructure improvements and $10.5 millionin worker training assistance, according to Jennings.

Jenningssaid the incentives have been offered to both Lockheed Martin and its CEV competitor,Northrop Grumman.

"We willnot play favorites," Jennings said. "We have issued an incentive package toboth of the companies. We are very pleased that Lockheed has come back and toldus that this is the place for them."

NorthropGrumman spokesman Brooks McKinney declined to say where his company would buildthe CEV if selected to do so.

"We arepreparing a CEV program implementation plan as part of the Phase 2 proposalthat we will submit next month to NASA," McKinney said via e-mail. "That planwill articulate the work locations and work flow processes that we believeoffer NASA and the nation the best value for developing and producing the CEV.At the current time, we consider this information to be competition-sensitive."

LockheedMartin and Northrop Grumman have been in a head-to-head competition for the CEVprime contract since 2004. Bids for the project are due in March, with NASAexpected to make a selection in late summer.

Karas saidthat if Lockheed Martin wins the competition, it would perform the CEV finalassembly work at NASA's Kennedy Space Center in the storied Operations &Checkout Building, using the incentive money offered by Florida to update thefacility and to do any worker training that may be necessary.

The CEVwork would provide 300-400 jobs, helping Florida offset job losses as the spaceshuttle program winds down in the years ahead, Karas said.

LockheedMartin plans to make further announcements in the weeks ahead about where itwould do CEV component and structures manufacturing, Karas said.

"We areextremely pleased and proud to partner with the state of Florida in support ofNASA's CEV program." Karas said. "The point of final assembly and testing foreach mission will be critical to the viability of NASA's CEV program and theideal location to do that is here in Florida adjacent to the launch site.