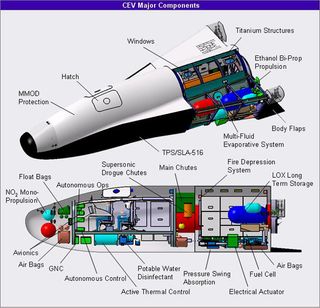 Now, local and stateeconomic development officials are mounting a campaign to build it here.

The recruitment effort gota boost this month when the Florida Legislature agreed to provide $3 million tohelp local and state officials woo companies competing for amultibillion-dollar contract to build the new spaceship, which will replaceNASA's shuttles after they retire in 2010.

"We are reaching outto the contractors to see what it is that we need to do as a state to capturesome of the work that, in the past, we haven't been able to do," saidLynda Weatherman, president and chief executive officer of the EconomicDevelopment Commission of Florida's Space Coast. "We're not just going towait around."

Florida long has had a lockon the work necessary to prepare and launch NASA, Department of Defense andcommercial space missions. But the rockets and spaceships that launch from theSpace Coast always have been built in other states and transported here.

Weatherman's group, alongwith the Florida Space Authority and other organizations, hope they canpersuade companies to build the Crew Exploration Vehicle in Florida.

NASA's aim to speed updevelopment of the shuttle replacement might end up being a great selling pointfor Florida, Weatherman said. New Administrator Michael Griffin has acceleratedNASA's plans, shifting the selection of a contractor from 2008 to 2006 in hopesthe new ship can be spaceworthy by 2010 so the United States is not without itsown way to get people to orbit.

The launch pads andprocessing facilities already in place at Kennedy Space Center and CapeCanaveral Air Force Station could be easily modified for use -- regardless ofwhat kind of rocket system NASA chooses to get the spacecraft off the Earth.

Also, the state has a coreof experienced space workers. That could help lure contractors looking todesign and build a shuttle replacement on a tighter schedule than expected.

Another advantage:proximity to the launch sites. By building the spaceships in Florida, companiescould save money because they would not have to transport them across thecountry.

Part of NASA's plan toreturn astronauts to the moon and later send human expeditions to Mars andother destinations in the solar system is keeping the cost within the agency'scurrent share of the federal budget -- about 1 percent. Anything that keepscosts down, such as cutting the cost of getting the spacecraft to the launchsite, could be attractive to the government when it selects a contractor.

Regardless of whether thenew spaceship is built here, Florida government officials are aiming to captureother work from the vision for space exploration, most notably research anddevelopment. A new life sciences lab at KSC is one example.

"Whoever wins thecontractor will be constructing the CEV wherever they want," said Sen.Bill Nelson, D-Melbourne, who flew on the shuttle in 1986. "But in thelong-term future of KSC, I want to see it become more and more of a researchand development center."