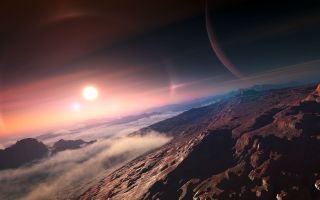 The diversity of exoplanets is large — more than 800 planets outside the Solar System have been found to date, with thousands more waiting to be confirmed. Detection methods in this field are steadily and quickly increasing — meaning that many more exoplanets will undoubtedly be discovered in the months and years to come. As an international scientific organisation, the IAU dissociates itself entirely from the commercial practice of selling names of planets, stars or or even "real estate" on other planets or moons. These practices will not be recognised by the IAU and their alternative naming schemes cannot be adopted.
(Image: © IAU/L. Calçada)

There may not be an alien planet named Heinlein any time soon if the International Astronomical Union (IAU) gets its way. The astronomy group issued a reminder Friday (April 12) that it is the only body authorized to give exoplanets their official names, despite recent naming initiatives by companies like Uwingu.

In the statement, IAU officials said that planet-naming schemes have "no bearing on the official naming process," and stressed the importance of having a unified procedure, even though its members welcome the public's interest. The IAU did not mention the space science funding company Uwingu (whose name means "sky" in Swahili) by name, referring only to a "recent name-selling campaign." But the young Uwingu did launch an initiative last month calling on the public to name the nearest Alpha Centauri Bb — an exoplanet 4.3 light-years from Earth — as part of a fundraising campaign.

Projects like Uwingu's Baby Planet Name Book seek to at least informally replace official planet names like HD 85512b or Gliese 667Cc with more playful nicknames. The initiative by Uwingu — a company that aims to raise money for space research, exploration and education — lets you add a nomination to the planet name registry for 99 cents. [Strangest Alien Planets (Photos)]

And for another 99 cents, you can vote for your favorite name on the list. In March, Uwingu started an offshoot contest, which runs through April 15, to name Alpha Centauri Bb, the newfound Earth-sized planet in the star system closest to our own. The company will use the money raised by the project to support research efforts like SETI's (the Search for Extraterrestrial Intelligence) Allen Telescope Array in California, as well as space launches and science outreach.

Uwingu CEO Alan Stern, a planetary scientist who also leads NASA's New Horizons spacecraft's mission to Pluto, said the IAU's claim to naming rights in space is a self-proclaimed one, and likened Uwingu's effort to a People's Choice endeavour.

"The IAU can't prohibit what it does not control. People's Choice naming contests and the colloquial naming of objects in space are unrelated to the IAU's purview of specifying nomenclature for astronomers," Stern told SPACE.com in an email. "The IAU no more owns the right to control the naming of objects in space for popular purposes than does a county that controls street naming have the right to deny people in the county who the right to  adopt a mile of highway in someone's honor."

In the Uwingu campaign, the names Ron Paul, Heinlein, Sagan, Asimov and Pele are currently among some of the more popular monikers that have been proposed so far. Official exoplanet names, often made up of a string of letters and numbers, may look dull and unmemorable in comparison, but IAU officials defended their process.

"While exoplanet names such as 16 Cygni Bb or HD 41004 Ab may seem boring when considering the names of planets in our own solar system, the vast number of objects in our universe — galaxies, stars, and planets to name just a few — means that a clear and systematic system for naming these objects is vital," IAU officials explained. "Any naming system is a scientific issue that must also work across different languages and cultures in order to support collaborative worldwide research and avoid confusion."

To be clear, Uwingu has said the nominations in its Baby Planet Name Book won't be official. But the organization had hoped astronomers might come around and consider using the names on the list to refer to new planets informally.

"At Uwingu, we're for opening up the naming of celestial bodies to as wide a spectrum of the public as possible, the IAU seems to want to go the opposite way," Stern said. "We think open-source naming it the future, and we're excited that so many in the public agree."

The International Astronomical Union was founded in 1919 to promote and safeguard the science of astronomy through international cooperation. The organization is the same one that officially demoted Pluto from a full-fledged planet to its current dwarf planet status in 2006.

This story was updated on April 13 to include new comments from Uwingu CEO Alan Stern.