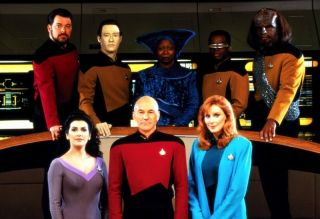 In science fiction shows like "Star Trek," spacefarers can leap from planet to planet as fast as they can change a T-shirt. But star hopping is going to take a lot longer in "real life," assuming it's possible at all.

To find out, the 100-year Starship Project is promoting the technologies needed to launch humans to the nearest star (Alpha Centauri, 25.2 trillion miles away) within a century. The voyage itself could take just as long — each way — which means it would span generations, and a lot of wardrobes.

Fashion came up as one of the biggest challenges facing the voyage at panel during this week's South by Southwest Interactive conference. The gathering featured astronaut Dr. Mae Jemison, SETI (Search for Extraterrestrial Intelligence) Chair of Research Dr. Jill Tarter and Levar Burton of "Star Trek" and "Reading Rainbow" fame.

"If you go into space right now … you take your clothes up with you, and you can get rid of wastewater and get more water brought back up," said Jemison, head of the 100 Year Starship Project, who is distinguished as the first woman of color in space (and for a cameo on "Star Trek: The Next Generation," directed by Burton).

There's no such luxury on a multi-century journey, she explained. Whatever you take is all that you have. "[You would need] boxcars of clothing per individual to be able to do things the way we currently do," said Jemison. She pointed out that the cycle of producing, washing and disposing of clothes is, "one of the nastiest, most toxic things that we as humans do."

Developing clothing for space requires rethinking the process and coming up with methods that are much less wasteful or polluting. And that, of course, could benefit everyone back on Earth, which is another goal of the program. "Everything that we need to survive on a starship, we need for being here on Earth," Jemison said. [See also: Stain-Proof Material Can Repel Virtually Any Liquid]

"Maybe we don't wear clothes," proposed Jill Tarter (who was the model for Jodie Foster's character in the movie "Contact"). "Maybe the clothes that we perceive ourselves to be wearing are some kind of projections that we can change with software," she suggested, to the bemused grins of Jemison and Burton.

"Or maybe we engineer our skin. We talk about pockets. Nature got that right, the marsupials have pockets."

But Burton, who remembers Captain Kirk pulling his communicator out of "that secret belt hook somewhere," and who served on a starship himself, set the record straight. "They don't have pockets in a spacesuit," he said. "It's all Velcro, y'all."