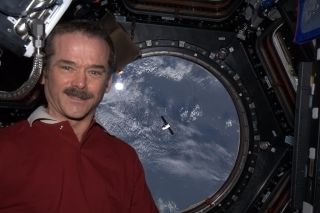 If becoming the first Canadian commander of the International Space Station weren't exciting enough by itself, Chris Hadfield now has the best wishes of Queen Elizabeth II to go along with it.

The queen — who reigns over the United Kingdom and 15 other Commonwealth realms, including Canada — offered her congratulations to Hadfield, who took charge of the orbiting lab's new Expedition 35 today (March 13).

"I am pleased to transmit my personal best wishes, and those of all Canadians, to Colonel Christopher Hadfield as he takes command of the International Space Station on Wednesday," Queen Elizabeth II said in a statement. "Our thoughts and best wishes are with him and the entire crew, as are our prayers for an eventual safe return to family, friends and fellow Canadians."

Hadfield assumed command of the orbiting lab from NASA astronaut Kevin Ford during a ceremony this afternoon.

"Thank you very much for giving me the keys to the family car," Hadfield said during the ceremony, which featured the playing of "O Canada" in his honor. "We're going to put some miles on it, but we'll bring it back in good shape."

Ford and Russian cosmonauts Evgeny Tarelkin and Oleg Novitskiy will head home to Earth Friday (March 15) - one day later than planned due to bad weather at their landing site - marking the official end of the station's Expedition 34 and the start of Expedition 35.

Hadfield, NASA astronaut Tom Marshburn and Russian cosmonaut Roman Romanenko will have the station to themselves until March 28, when three new crewmembers will arrive aboard a Russian Soyuz spacecraft.

Hadfield is the first citizen of a Commonwealth nation — the group of 54 countries that have maintained ties after the British Empire came to an end — to hold the space station's keys. He's just the second-ever commander who is neither a NASA astronaut nor a Russian cosmonaut. (Belgian spaceflyer Frank De Winne led Expedition 21 in 2009).

The guitar-strumming Hadfield had already made a mark on the space station before taking charge. Shortly after arriving in December, he played the first original song ever recorded on the space station. And in February, Hadfield performed a duet with Barenaked Ladies singer Ed Robertson, a fellow Canadian, who did his part from Earth.