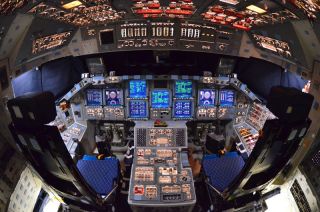 Space shuttle Atlantis, which flew the final mission of NASA's 30-year shuttle program in July 2011, is now being prepared to be publically displayed at the Kennedy Space Center Visitor Complex in Florida.
(Image: © © collectSPACE/Robert Z. Pearlman)

The newest innovation in space travel might be a boon for overworked astronauts. A brain-computer interface that allows astronauts to control a shuttle using only their thoughts is being developed by researchers in the United Kingdom.

Discovery News reports that a group of researchers from the University of Essex in the U.K. has developed the first ever brain-computer interface (BCI) that can be used to control a spacecraft simulator.

The researchers, who tested the new BCI at NASA’s Jet Propulsion Laboratory in Pasadena, Calif., began by putting an electrode cap on a human subject. They then created a computerized simulation wherein test subjects were presented with a challenge- steer a spaceship around the sun just by thinking about it.

The “spaceship” was represented by a large circle on the screen and the “sun” was a white sphere that grew larger as the spaceship was guided closer. Eight gray dots were arranged in a circle around the screen, and the subject used these dots as reference points to steer the ship in a particular direction.

When the subject concentrated on moving the spaceship toward one of the gray dots, several computers worked in tandem to read the brain signals and display the spaceship’s movements in real time.

Because the experience of working with a BCI requires intense concentration, subjects working alone were likely to lose focus at some point, leaving the spaceship temporarily without a pilot. But when two people were hooked up to the electrodes simultaneously, researchers found that those lapses in attention were less likely to affect the trajectory of the simulated flight.

Riccardo Poli, lead scientist behind the new BCI, said that such joint decision-making could come in handy, not only in space, but in military operations. Intelligence officers who have to sift through large amounts of data, for example, might be less likely to overlook something if they’re working together while connected to the BCI, he said.

“Brain interfaces could, in the near future, measure attention and vigilance, motivation, fatigue, cognitive load, and affective state,” Poli said.

Though Poli said the interface still needs a lot of work before being useful to astronauts, he believes it’s an important first step in moving BCIs out of the lab and into real- life applications.

This story was provided by by TechNewsDaily, a sister site to SPACE.com.