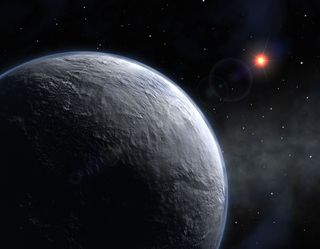 It's a race to the bottom.

No, I'm not talking about daytime TV. I'm referring to the search for extrasolar planets, and the scramble to find smaller, daintier worlds.

Normally, when astronomers trumpet the discovery of yet another extrasolar planet, it's nearly always a hulking, Homeric object; Jupiter-sized or so. That's been as predictable as hair loss.

However, the holy grail of the planet sleuths has been to find the small guys; after all, bantam worlds are more likely to be similar to our own. Well, last week a horde of astronomers jointly announced a new, cool planet weighing in at about five times the mass of the Earth. It's still a beefy brute compared to terra firma, but a heck of a lot smaller than just about everything else found so far.

This planet (which sports the quick-off-the-tongue name of OGLE-2006-BLG-390) and its home star (a dim, M-dwarf) are interesting. But what really arched my eyebrows was that this new punk planet wasn't found with any of the usual schemes. It wasn't outed by the subtle dance of its host star, nor was it revealed because it eclipsed that star, dimming it ever so slightly.

This planet was discovered because mass bends light. Or more accurately, mass bends space, and if space is bent, so are the light beams that dart through it. This weird idea, as most readers will know, is completely at odds with Isaac Newton's rigidly Cartesian conception of space - an immutable, three-dimensional stage, constructed of perfectly right-angled mathematical scaffolding. In 1915, Albert Einstein propounded the concept of warped space in his General Theory of Relativity.

Einstein's idea was radical, so proof was clearly required. Arthur Eddington, a prominent British astronomer of the early twentieth century, realized that if mass really contorted space, then a flashlight beam passing near a bowling ball should bend slightly away from a straight line. The problem is, it bends entirely too slightly to be measured, because bowling balls aren't very massive (except in comparison to Pachinko balls).

Eddington, who was keen to check Einstein's idea, suggested doing so by observing starlight as it passed near the biggest mass in the neighborhood: the Sun. Of course, that's not easy. The Sun's incandescent orb dashes any hope of seeing stars that are grazing its edges - except during a total solar eclipse. Fortunately, there was a particularly long eclipse coming up on May 29, 1919. Eddington and fellow astronomer Andrew Crommelin traveled to West Africa and Brazil respectively, to photograph the stars appearing adjacent to the Sun as the moon blocked its glare. When the plates were developed and measured, Eddington found that the stars were, indeed, slightly nudged from their normal positions in accord with the prediction of General Relativity. It had been proven that mass bends space, and warped space bends light beams. Einstein was right. Newton, who had been dead for three hundred years, refused comment.

Aside from revolutionizing physics, using big masses to bend light has turned out to have some practical astronomical applications. After all, mirrors and lenses bend light too. So can you build a mass-based telescope? Well, you can, if you're willing to accept what's available in God's optics shop. For example, when the Hubble Telescope is trained on a large cluster of galaxies - one whose collective bulk might be 100 trillion times the mass of the Sun - it often finds giant arcs of light looping through the field of view. These arcs are the distorted images of galaxies lying far beyond the cluster, brightened and bent by the effects of its mass.

It was this type of gravitational lensing that the international research team that discovered OGLE-2005-BLG-390 brought to bear. This group uses a network of small telescopes to monitor large numbers of stars near the central neighborhoods of the Milky Way. In these crowded stellar realms, a star will occasionally pass in front of another, acting as a gravitational lens - a giant magnifying glass - to boost the latter's brightness by a factor of three or so. The surge in intensity typically lasts for about a day. In this case, there were irregularities in the brightening, and these irregularities betrayed a planet orbiting the nearer star. It's a technique that has the capability of finding very small worlds around very small stars.

But here's another bright idea, one that was pointed out by SETI pioneer Frank Drake and Stanford engineer Von Eshleman nearly two decades ago. You could use this gravitational lensing technique to build the mother of all radio telescopes. Well, actually, you don't have to build it; you merely have to get in position to use it. All that's required is to bolt a small SETI antenna and radio receiver onto a spacecraft, and send it cruising to the lonely, outer fringes of our solar system - to about twenty times the distance of Pluto (for the quantitatively inclined, the minimum distance is 550 astronomical units). Once there, the antenna would look back towards the Sun - which at that distance appears only as a dim star. Nonetheless, the Sun would act as an enormous radio lens, amplifying any signals from star systems on the other side. Indeed, the effective size of this solar lens would be roughly thirty thousand times the collecting area of the gargantuan Arecibo Radio Telescope in Puerto Rico. It could detect a transmitter with the power of your local TV station at a distance of a hundred light-years, even if the alien broadcasters weren't beaming our way.

While this idea is seductive, it's not lacking in potential gotcha's. You'd want to have the spacecraft orbit the Sun in the plane of the Milky Way, so as to maximize the number of star systems put "under the loupe". But the time spent looking at any one star system would be very short, so you'd need a setup that could reliably recognize a signal heard only briefly, and only once. In addition, there's the small matter of arranging to send a spacecraft far beyond the fringes of the Kuiper Belt, and having it operate for years after it arrives.

Well, those are merely problems to be worked out by the student. Sure, the gravitational lens SETI scope is not something we'll do soon. But the physics is there, and maybe someday the experiment will be there, too. Then, perhaps, we may cup our radio ears to the whispers of distant beings, gliding our way on the subtle contours of space.