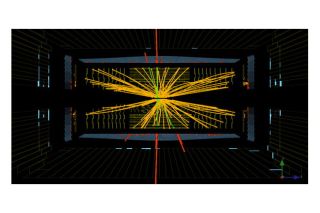 The mass of the Higgs boson particle, possibly uncovered at the Large Hadron Collider (LHC) in Geneva, may mean doom for our universe. Here, proton-proton collisions at the LHC showing events consistent with the Higgs.
(Image: © CERN/CMS/Taylor, L; McCauley, T)

The apparent discovery of the Higgs boson particle last year has opened doors to new calculations that weren't previously possible, scientists say, including one that suggests the universe is in for a cataclysm billions of years from now.

"It may be the universe we live in is inherently unstable, and at some point billions of years from now it's all going to get wiped out," Joseph Lykken, a theoretical physicist at the Fermi National Accelerator Laboratory in Batavia, Ill., said Monday (Feb. 18) at the annual meeting of the American Association for the Advancement of Science.

That projection is based on a calculation of the universe's "vacuum instability" that depends on the mass of the Higgs boson, which physicists think they've found at the world's largest particle accelerator, the Large Hadron Collider in Geneva. Scientists there discovered a new particle whose properties suggest it's the Higgs, though further proof is needed to be certain.

But what does this particle have to do with the fate of the universe?

Currently, calculations suggest, the Higgs field is at a potential minimum, but it's possible, at some point, that the field could "tunnel" to another potential minimum that would give it different properties. (Tunneling is the quantum mechanical equivalent of boring through a hill from one valley to another, rather than traveling up and then down the hill.)

But if the universe's Higgs field tunneled to a new potential energy minimum, it could become much stronger, causing the universe's particles to gain mass. Any change in the mass of fundamental particles like the proton and electron would have drastic repercussions. Atoms, planets, stars and galaxies would no longer hold together as they do now if their fundamental constituents were altered.

"Then all the laws of physics change and everything is torn apart," said Barklow, who is a member of the ATLAS experiment at the Large Hadron Collider, one of the projects that discovered the possible Higgs boson.

The likelihood of whether or not this eventuality comes to pass depends on a number of properties, including the mass of the Higgs boson. That wasn't known until just recently, when the Large Hadron Collider produced a never-before-seen particle that looks to be the Higgs. This particle's mass is about 126 billion electron volts, or about 126 times the mass of the proton.

The vacuum instability of the universe also depends on the mass of the top quark, one of the ingredients of the protons and neutrons that make up all the atoms in the universe.

Both the Higgs mass and the top quark mass turn out to be just what's needed to create a fundamental instability in the Higgs field, and therefore to doom our universe. [End of the World? Top 10 Doomsday Fears]

It seems to be a perfect storm to spell a dismal end to our universe in many billions of years. But don't worry too much.

"Other things, like the sun going nova, will happen before this happens," Peskin said, so humans probably won't be around to mind.

Plus, the situation isn't locked tight just yet. For one thing, the mass of the top quark isn't known precisely enough yet.

And furthermore, the whole Higgs instability scenario depends on there being no new particles beyond the ones known now. Since many physicists suspect the universe is actually rich with particles they haven't yet discovered, such as the plethora of particles predicted by the theory of supersymmetry, the Higgs instability could be moot.

"This observation is very interesting, but there's a big debate about what it means," Peskin told LiveScience. Some experts think that the fact the Higgs boson has the mass it does is because the universe truly is unstable.

"And there are other people like me, who say it's just a curiosity and after we discover supersymmetric particles, people will say it's totally irrelevant," Peskin said."We don't know who's right, that's what's so beautiful about this."