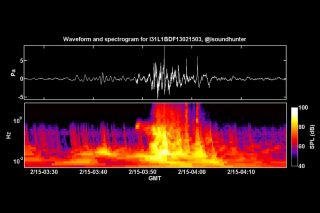 A new recording lets human ears listen in on the largest infrasound blasts ever recorded, created by the meteor that exploded over Russia last week.

Infrasonic waves from the Russian meteor fireball were picked up by 17 infrasound stations around the world, part of a network for detecting nuclear weapon explosions. Stations as far away as Antarctica tracked the blast's low-frequency waves as they traveled through Earth's atmosphere.

The signal was filtered and sped up 135 times to make it audible to human ears, according to the Comprehensive Nuclear Test Ban Treaty Organization (CTBTO), which runs the stations. [Listen to the recording]

The meteor blast was not a fixed explosion, Pierrick Mialle, an acoustic scientist for the CTBTO, said in a statement. Instead, the meteor was traveling faster than the speed of sound, burning up as it went. "That's how we distinguish it from mining blasts or volcanic eruptions," he said.

Mialle said that scientists around the world will use the infrasound data to learn more about the meteor's final altitude, how much energy it released and how it disintegrated.

Based on scrutiny of infrasound records, NASA scientists initially concluded the fireball released about 300 kilotons of energy, Bill Cooke, head of the Meteoroid Environments Office at NASA's Marshall Space Flight Center in Huntsville, Ala., said Feb. 17.