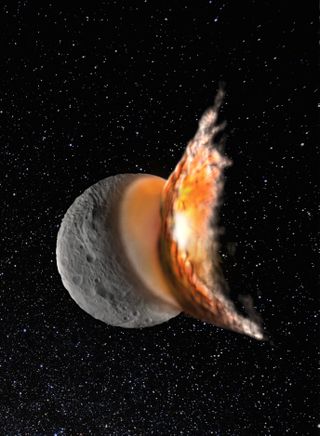 The young asteroid Vesta started off as a round protoplanet, but a massive collision early in its life caused it to become more elliptical in shape and created the giant crater Rheasilvia, scientists say. This image is an artist's illustration of that catastrophic event. Image released Feb. 13, 2013.
(Image: © Martin Jutzi)

Astronomers have recreated two cataclysmic collisions that sculpted the interior of the giant asteroid Vesta, revealing that the so-called protoplanet may actually have a crust far thicker than expected.

The new model is based on computer simulations of separate collisions between the asteroid Vesta and a pair of 20-mile-long (32 kilometers) rocks within the last billion years. The results suggest that the cosmic impacts caused Vesta's crust to melt and then re-form, making its crust thicker than can be explained by typical rock layering, scientists said.

The collisions carved two large impact craters into the surface of Vesta. The oldest, Veneneia, formed approximately 2 billion years ago. With a diameter of 245 miles (395 kilometers), the crater covers almost three-fourths the diameter of Vesta's equator.

Almost a billion years later, another large body scooped out an even broader chunk. The resulting crater Rheasilvia is 314 miles (505 km) long. Spanning 90 percent of Vesta's diameter, it is one of the largest craters in the solar system.

By modeling the impacts that formed these craters, a team of international scientists said it was able to peer into the heart of Vesta. [Photos: Asteroid Vesta by NASA's Dawn Probe]

"It was one of the initial goals of our study to discover more about the interior," principle investigator Martin Jutzi, of the University of Bern in Switzerland, told SPACE.com by email.

The second most massive asteroid in the solar system, Vesta started off as a protoplanet. But the close presence of Jupiter stunted its growth. The interior of Vesta, unlike that of most asteroids, separated into layers resembling a planet's, with a rocky crust covering a mantle composed of the mineral olivine. A metallic core lies at the center.

The collisions that formed Veneneia and Rheasilvia gouged out material as deep as 60 miles (100 km) into the crust. Since conventional theories put the crust at approximately 25 miles (40 km) thick, such impacts would have scooped through the crust and scattered pieces of the mantle across the surface.

In 2011, NASA's Dawn spacecraft entered orbit around the asteroid and found otherwise. In the year it spent before it moved on to Ceres, Dawn studied the surface of Vesta and detected no trace of the mantle that should have covered the floor of Rheasilvia.

"The observations made by Dawn suggest that olivine-rich rocks are lacking in the south pole basins," Jutzi said. "This suggests that the mantle of Vesta has not been excavated during the two large impacts in the southern hemisphere."

The scientists suggested three possible reasons for the findings:

The thickened crust scenario is favored by the team's model, according to study co-author Jean-Alix Barrat, of the University of Western Brittany in France. Such a crust would account for the wealth of samples from deep within the crust.

The scientists' model correctly predicted the basic shape of the basins, although some of the details were slightly off. For instance, their model predicted higher elevations in the southwestern region of the asteroid, but such elevations are instead found in the opposite area. Such differences could be explained by slight variations in the angle of impact, according to the team, but should have minimal effect on how material ejected by the impacts was distributed.

The results were published online today (Feb. 13) in the journal Nature.