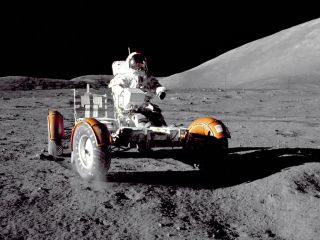 Apollo 17 mission commander Eugene A. Cernan makes a short checkout of the Lunar Roving Vehicle during the early part of the first Apollo 17 extravehicular activity at the Taurus-Littrow landing site in 1972.
(Image: © NASA)

HOUSTON — The last man to walk on the moon made an unexpected call to the most recent men to live in space this week during a visit to NASA's Mission Control room.

Gene Cernan, who in December 1972 commanded Apollo 17, the sixth and final lunar landing mission, was touring the Johnson Space Center here with some friends when he was invited by flight controllers to talk live with Expedition 34  commander Kevin Ford and flight engineers Chris Hadfield and Tom Marshburn in the U.S. Destiny laboratory on the International Space Station, 260 miles (415 kilometers) above the Earth.

"I didn't know I was going to be able to do this," Cernan told the station's crew during the visit on Tuesday (Feb. 5). The moonwalker, who was using a phone receiver to talk with the astronauts in space, could see Ford, Marshburn and Hadfield on the large screens at the front of the control center room.

The ISS residents were in turn able to see Cernan via live streaming video on one of their laptop computers.

"I'm personally proud," Cernan commented. "I'm at the age now where most of you were probably in diapers or knee pants when I went to the moon, but at least what we did worked because it inspired you to do what you're doing." [Apollo 17 Moonwalker Calls Space Station (Video)]

"I think I was 12 when you came home from the moon for the last time," Ford responded, "and you did inspire us for sure, just like whole world, frankly. Every place I go in the world, they know NASA because what you guys did back then that long ago."

The space-to-ground conversation, which aired on NASA's television channel and was streamed through the space agency's website, showed Ford, Marshburn and Hadfield floating inside the orbiting laboratory with room to spare. And they were inside just one of the space station's dozen modules, which they share with three other crewmates, Russian cosmonauts Oleg Novitskiy, Evgeny Tarelkin and Roman Romanenko.

Cernan was struck by the sheer size of the space station, especially given his own experiences in orbit.

"You guys live in a hotel. You're living in a palatial palace up there," Cernan stated. "I got to go back to the Gemini days when you had to share elbow room with your buddy and you never got out of your spacesuit for three days."

Cernan flew three times to space, including two missions to the moon. He made his first flight seated inside NASA's two-seater Gemini spacecraft. Cernan's only opportunity to stretch his legs during the Gemini 9 mission was during a two-hour spacewalk.

"We talked about living up there like we live down here, we didn't even have hot water on the moon to warm a cup of coffee," Cernan said.

"You're right, the space station is a palace, actually," Ford radioed. "We did fly up here in a [Russian] Soyuz though, and I bet you, inch-for-inch for elbow room, that it's pretty tight, too. But we didn't have to spend a lot of time in it, and we only have four hours home from here."

"I've been here for a little over 100 days now and Tom and Chris have been up here 45 or so," the station commander told Cernan. "Living in space is something we can do now because of what you guys did those years ago."

Cernan's visit to Mission Control was with some friends from Space Center Houston, the official visitor center for Johnson Space Center. Thousands of young children visit the museum and attraction to learn about NASA's past, present and future activities in space.

"You're doing one heck of a great job and you have got a big legacy to build upon. From where you leave off, we're going to get those kids excited down here about pressing on and going even further," Cernan told Ford and his crew members.

"Yours is a remarkable story, we can't compete with that," Ford said to Cernan. "Great to have you in the center and truly have you aboard the International Space Station."

"One last thought," said Cernan. "We always used to look at it as we stood on the shoulders of giants of the nation. Remember, when you guys get back, the job is not done. You are now the shoulders for those kids to stand upon."