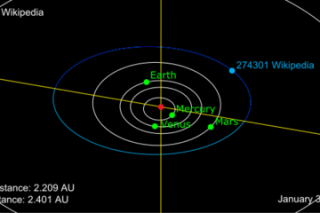 Wikipedia is loaded with articles on space. And now Wikipedia is in space, too — specifically, as an asteroid newly named "Wikipedia." The Committee for Small Body Nomenclature has renamed a main belt asteroid, previously labeled number 274301, with an official moniker: Henceforth, it's known as Wikipedia.

Astronomers at the Audrushivka Astronomical Observatory in Ukraine first spotted the asteroid in August 2008. Observatories in Caussols-ODAS in France and Mt. Lemmon Survey and Steward Observatory in Arizona also observed the asteroid. The Committee handed down the official name on Jan. 27, based on a suggestion from a member of the Wikimedia Foundation in Ukraine.

Researchers also posted some scientific facts about Wikipedia (the asteroid), including its measurement of one to two kilometers (about a mile) in diameter and its orbit, which takes it around the sun every 3.68 Earth years. And it won't collide with Earth, so no need to call Bruce Willis.

Astronomers around the world, and at NASA, regularly scan the night sky in order to search for near-Earth asteroids and other objects that could potentially pose an impact threat to Earth. (The latest, with the less-elegant name "2012 DA14," is due to pass within 17,200 miles of the Earth on Feb. 15.)