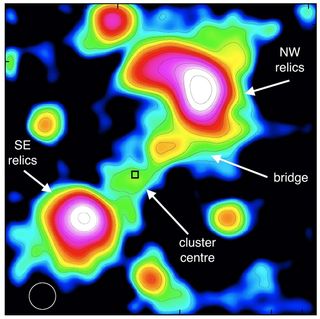 "This is one of the biggest structures ever observed," study lead author Ettore Carretti told SPACE.com. "It is more than 100 times the size of our galaxy, the Milky Way, which already stretches for 100,000 light-years."

Carretti, an astrophysicist at the Commonwealth Scientific and Industrial Research Organization in Australia, and his colleagues used the Parkes Radio Telescope in New South Wales to analyze a cluster of galaxies known as Abell 3667. The cluster lies about 730 million light-years from Earth. (A light-year is the distance light travels in one year, about 5.9 trillion miles, or 9.5 trillion kilometers.)

"Clusters of galaxies are made of thousands of galaxies and are among the largest gravitationally bound structures," Carretti noted.

The researchers detected a diffuse radio glow in the gas and dust connecting the cluster's periphery to its core. The structure is about 13 million light-years long. [Biggest Structure in the Universe Explained (Infographic)]

Carretti said: "This is the first clear imaging of a huge impact between two merging clusters of galaxies. The overall structure we observe, part of which was already known, is a monster shock wave and its trailing wake caused by the cluster impact. The wake is the leftover after the passage of the shock, which leaves behind a turbulent 'shaken' medium."

The shock wave is expanding at a speed of about 2.6 million miles per hour (4.3 million kilometers per hour).

"This means that the overall structure we observe has taken some 2 billion years to form," Carretti said. "This is a long time, even compared to the age of the universe, which is 13.7 billion years. So what we observe has taken 15 percent of the age of the universe to form. These are huge structures and take cosmological times to form, and it is still expanding and evolving."

It remains uncertain how the merging clusters produced this glow. The researchers suggest the turbulence from the collision sent electrons zipping at near-light speeds, making them shine with radio waves in the process.

The researchers want to check other galaxy clusters for similar structures. "We want to understand how common such very large-scale structures are and what would be the implications in understanding the formation and the evolution of the galaxy clusters," Carretti said.

The scientists will detail their findings in an upcoming issue of the journal Monthly Notices of the Royal Astronomical Society.