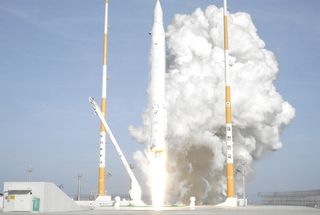 South Korea launched its first homegrown rocket into space Wednesday (Jan. 30) after a series of delays and two earlier failures, marking a spaceflight leap for the country's space program, according to press reports.

"At 4 p.m. today, the Naro was successfully launched. The satellite was deployed 540 seconds after the launch and an analysis of related data shows the satellite has successfully entered its target orbit," Lee Ju-ho, minister of education, science and technology told Yonhap News Agency.

Today's successful liftoff marks South Korea's third launch attempt to send a satellite into orbit, and the country's first attempt since 2010. South Korea's attempts to launch the Naro rocket in 2010 and 2009 met with failure, with this latest mission experience weeks of delay due to technical issues.

Today's launch carried the 220-pound (100 kilograms) STSAT-2C satellite into orbit atop the 108-foot-tall (33 meters) KSLV-1 rocket. The rocket consists of a Russian-built first stage and a South Korean upper stage.

Officials won't be sure the satellite made it into orbit unscathed until Thursday (Jan. 31) when the spacecraft can make contact with ground stations in South Korea the news agency goes on to report. A ground station in Norway did pick up beacon signals from the satellite, suggesting that it is performing as expected, mission officials said.

The STSAT-2C satellite was expected to reach a final orbit that circles the Earth once every 103 minutes, with a high point about 932 miles (1,500 km) above the planet and a low point of about 186 miles (300 kilometers), according to previous mission descriptions.

South Korea's successful rocket launch comes just over a month after its nearest neighbor, North Korea, successfully launched its own Unha-3 rocket and a satellite into orbit in December. U.S. and other observer nations, however, suspect the North Korean rocket launch was a veils missile test to support that country's ballistic missile program.