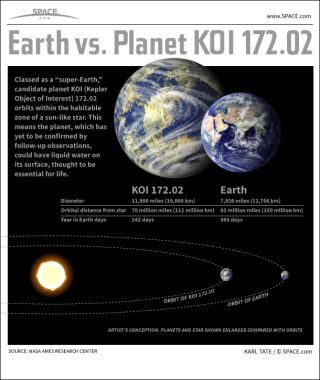 Planet KOI 172.02 has yet to be confirmed, but it could potentially have water and life.
(Image: © Karl Tate, SPACE.com contributor)

Classed as a “super-Earth,” candidate planet KOI (Kepler Object of Interest) 172.02 orbits within the habitable zone of a sun-like star. This means the planet, which has yet to be confirmed by follow-up observations, could have liquid water on its surface, thought to be essential for life.

KOI 172.02 is about 1.5 times the diameter of Earth. The planet orbits its star at a distance of 0.75 astronomical units, or about three-fourths of the distance from the Earth to the sun. The exoplanet takes about 242 Earth days to orbit its star.

Launched in 2009, the Kepler space telescope orbits the sun every 371 days. As it travels, Kepler keeps itself pointed at a single patch of sky. Sensors monitor the brightness of 150,000 stars simultaneously, looking for telltale drops in intensity that could indicate orbiting planets.

Kepler’s planet search is conducted in a narrow wedge-shaped volume of space that stretches out ahead of us as we orbit the galaxy. Stars in the search volume are therefore at about the same distance from the center of the galaxy as the Earth.