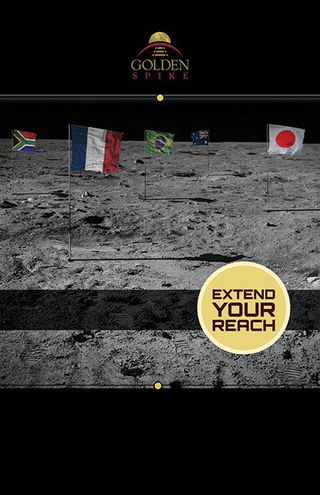 Northrop Grumman built the very first manned lunar landers back in the 1960s (when the company was called Grumman) for NASA's Apollo program. The firm made the Eagle module that carried Neil Armstrong and Buzz Aldrin to the lunar surface for the first manned moon landing in 1969.

Now the company will design a vehicle to help Golden Spike achieve its goal of establishing routine commercial transportation of people to the moon and back by the end of the decade.

"This is a significant step forward in our plans," Gerry Griffin, Golden Spike's board chairman, said in a statement. "Northrop Grumman brings Golden Spike a unique body of knowledge and skills as the only company to ever build a successful human-rated lunar lander, the Apollo Lunar Module."

The founding of Golden Spike (named after the final spike built into the First Transcontinental Railroad), was announced just last month, though the project has been secretly in the works for two and a half years. [Graphic: How Golden Spike's Moon Landing Plan Works]

The startup hopes to sell round-trip moon expeditions to foreign countries, research organizations and even some wealthy individuals. Company market studies suggest Golden Spike could sell and carry out 15 to 25 of these trips within 10 years, once it gets going. Each expedition will carry a price tag of roughly $1.5 billion, company officials have said.

To launch these journeys, Golden Spike officials say existing rockets and spacecraft already built or under development can be enlisted. The only major hardware element that must be designed and constructed from the ground up is the lunar lander.

Northrop Grumman will explore a variety of different lunar lander concepts, looking for the best combination of reliability, affordability, and operability, officials said.

"We're very proud to be working with Northrop Grumman, which has the most experience and successful performance record for human lunar lander designs in the world," said planetary scientist Alan Stern, Golden Spike's president and CEO.

For now, Northrop Grumman has been hired to design the lunar lander, but whether or not the same firm will construct it remains to be seen.

"This study is one of a number of initial studies we're undertaking to begin creating the design requirements and specs for the lander contract competition we expect to hold to select a Golden Spike lander for flight development," said James R. French, Golden Spike's Lunar Lander Systems Study (LLaSS) engineering chief.