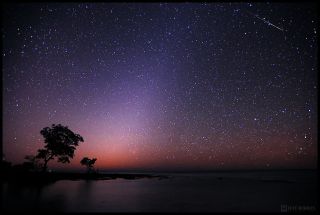 The first meteor shower of 2013 will kick off the year's night sky events this week, giving stargazers a chance to ring in the New Year with a celestial fireworks display.

The Quadrantid meteor shower is an annual meteor shower every January. While this year's "shooting star" show is not expected to outshine some of the more spectacular meteor showers of 2012, it may give stargazers with clear, dark skies a great start to the New Year.

"Those who brave the cold might see up to 40 meteors per hour, although moonlight will make faint meteors harder to spot," officials with the Hubble Space Telescope explained in a January skywatching video guide.

The waning gibbous moon will be out in full force during the shower's peak, but skywatchers in dark areas of the Northern Hemisphere during the wee hours of Thursday morning might still get a decent show.

Scientists suspect that the meteors of the Quadrantids are debris from the asteroid 2003 EH1 — the same source of the Geminid meteor shower every December. The asteroid itself may be a chunk from a shattered comet that broke into pieces several hundred years ago, NASA officials said in a statement.

The Quadrantid meteor shower occurs when the Earth passes through a stream of debris from the comet. The fragments slam into the atmosphere at 90,000 mph (144,841 kph) and burn up 50 miles (80.5 km) above the planet in a dazzling display.

The meteor shower is named for the outdated Quadrans constellation, which is no longer recognized by astronomers, NASA officials said.

"Located between the constellations Bootes and Draco, Quadrans represents an early astronomical instrument used to observe and plot stars," they added.

However, the constellation was still relevant in 1825, when the meteor shower was first documented by astronomers.

Just in case you aren't interested in braving the cold, NASA is streaming the shower for free online from Jan. 2 to Jan. 4. NASA's Marshall Space Flight Center in Huntsville, Ala., has a light-activated camera pointed to the sky to record and live-stream the meteor shower during its peak.