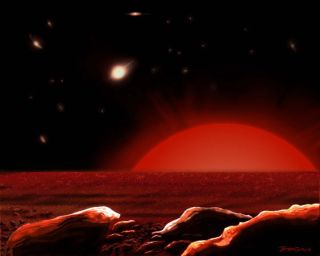 Artist's conception of the view of a hypothetical planet around a distant red giant star. Our sun is expected to swell in a few billion years to first fry Earth then engulf it.
(Image: © James Gitlin (STScI))

Billions of years from now, life on Earth will be extinguished when the dying sun scorches the surface of our planet. New research has aimed to determine what the last life forms on Earth will be, and what kind of abodes they will cling to before the Earth becomes sterilized.

We are fortunate that our planet orbits a star that has a long main-sequence lifetime. However, the sun’s luminosity is gradually increasing, and in about one billion years the effects of this will start to be felt on Earth.

Surface temperatures will start to creep relentlessly upwards over the next few billion years, which will increase the amount of water vapor in the air. This will act to further increase temperatures and will thus signify the beginning of the end for life on Earth.

The rising temperatures will cause excessive amounts of rain and wind, and thus increase the weathering of silicate rocks, which will suck extra carbon from the atmosphere. [Top 10 Ways to Destroy Earth]

Ordinarily, the carbon is replaced via plate tectonics in the carbon-silicate cycle as it is released in volcanic gases. However, the oceans will start to evaporate as the temperatures continue to rise, which will probably put a stop to plate tectonics as scientists believe that water is an essential lubricant for the motion of tectonic plates on Earth. This will deplete the number of active volcanoes, and the carbon will not be replenished in the atmosphere.

The lack of carbon dioxide will effectively choke plant life on Earth, since plants require atmospheric CO2 for their respiration. The death of oxygen-producing plants will in turn lead to less oxygen in the atmosphere over a few million years. This will spell disaster for the remaining animal life on Earth, with mammals and birds being the first to become extinct. Fish, amphibians and reptiles would survive a little longer, as they need less oxygen and have a greater tolerance to heat.

The last type of animal present on the far-future Earth would likely be invertebrates. Once the insects finally succumb to the increasing temperatures, the Earth will once again be solely populated by microbial life, just as it had been for the first few billion years of our planet’s history. The last lingering life will desperately seek out niches of the planet that are still habitable, but  even extremophile forms of life will find this to be a challenge.

A habitable niche in an inhospitable world

As the Earth’s oceans evaporate, the few remaining pools of water could provide a last refuge for some microbes. The present average depth of the oceans is 2.5 miles (4 kilometers), but this extends to 6.8 (11 km) in the Mariana Trench, which is the deepest known ocean trench.

Trenches carved in the sea bed could be among the last places to harbor liquid water, with the looming walls offering some source of shade from the unforgiving sun. However, this potential haven is not quite as inviting as it may first seem. Air moving into the trench will become compressed as it sinks lower, and this pressure will greatly increase the air temperature above the water.

"By the time we get to the point where there's a trench with a small pool of water at the bottom, a large mass of ocean water would have evaporated, so surface temperatures on the planet would be rapidly increasing," said Jack O’Malley-James of the University of St. Andrews, and lead author of the new study. "Therefore, water at the bottom of a trench wouldn't remain cool enough for long enough to make a good refuge for life."

Another potential haven for the last microbial life on Earth could be in underground caves. Microbes have been found living in caves on the present-day Earth without any need for sunlight. Most caves in the far-future Earth would not be suitable for life, as temperatures increase with depth. However, caves that have large chambers below a narrow entrance might be colder, as the dense cold air is sucked in, but lighter warmer air is barricaded out.

Such caves are formed from collapsed lava tubes, and the cold air in the caves will cause in-falling snow to compact into ice during the winter, as well as freeze any incoming water. When the outside temperature climbs again, the cold air is still trapped within the cave, along with the ice. However, the ice will melt eventually as heat is conducted through the walls of the cave, so it must be continually replaced and therefore some source of water would still be necessary on the far-future Earth for such a cave to retain its cool climate.

Life could also exist in subsurface environments other than ice caves. Microbial life today has been found at depths of 3.3 miles (5.3 km) below the Earth’s surface. The increase of temperature with depth is around 86 degrees Fahrenheit (48 degrees Celsius) per mile (1.6 km); however, the exact increase depends on the type of rock. Such a subsurface refuge could be one of the last to contain life on Earth.

At the other end of the scale, temperatures will decrease by around 18.9 degrees Fahrenheit (10.5 degrees Celsius) per mile above the Earth’s surface. This is because the surface of the Earth re-radiates heat that has been received from the sun, thus heating the lower atmosphere.

The lower temperatures at high altitude would encourage microbial life on the far-future Earth to reach for the skies and seek refuge in the last remaining lakes in the mountains in an attempt to escape the heat. However, as tectonic plates cease to crash into each other, there will no longer be a force to drive mountains upwards. Instead, the mountains will succumb to weathering and eventually there will be fewer regions of high altitude on the planet.

The remaining high-altitude regions would likely be comprised of volcanoes, as convection of molten rock in the mantle of the Earth will still occur even after the cessation of plate movement. The lack of plate tectonics will allow these "hot spot" volcanoes to reach heights that are currently impossible to achieve today.

"Sites around active volcanoes on Earth today host life, so living near an active volcano shouldn't be a challenge for extremophilic microorganisms," said O’Malley-James. "It's likely that volcanic activity would decline as the planet cools, but it may not stop completely during the time period in which planet is still habitable."

Isolated pools from the remnants of the ocean will have high salt concentrations, meaning that bacterial life would have to withstand high saline as well as high temperatures. Such microbes are called thermohalophiles, and they exist today in such conditions around hydrothermal vents. Microbes on the far-future Earth would also have to contend with being bombarded with high doses of ultraviolet radiation, as the ozone layer would have been stripped away when the oxygen in the atmosphere diminished. [Wipe Out: History's Most Mysterious Extinctions]

Biosignatures of a dying planet

Thermohalophiles, such as those found at volcanoes in Chile's Atacama Desert, use carbon monoxide to obtain energy, and the by-products of their metabolic processes include carbon dioxide, hydrogen, and ethanol.

Carbon dioxide could be seen as an indicator of life, considering that the carbon dioxide inherent to the planet would have been severely reduced million of years previously. Carbon dioxide by itself is not a biosignature and its presence, such as on Mars, does not indicate that life exists on a planet. However, biologically produced carbon dioxide would cause a disequilibrium of the CO2 in the atmosphere that could reveal the presence of microbial life.

Similarly, the biological production of hydrogen by the thermohalophiles could create an excess of hydrogen in the atmosphere, which could be used as an indicator of life. However, all of these biosignatures would likely be weak, as biological productivity would be severely diminished in a dying world. [7 Potentially Habitable Alien Planets]

Microbes can adapt to extreme conditions, such as the harsh conditions that existed on the early Earth. The first life to appear on Earth, as far back as 3.8 billion years ago, was unicellular life. Similarly, microbes will be the sole occupants of the Earth during its final days as a habitable planet. Microbial biospheres would exhibit biosignatures that are very dissimilar to what is present on the current Earth, but whether late-type biospheres would appear similar to early-type biospheres is another question.

Future work will seek to refine what these biosignatures could be, and ultimately search for the telltale signs of a dying habitable planet among the Earth-like planets that have been discovered so far.

The paper has been published in the International Journal of Astrobiology. The preprint can be found here: http://arxiv.org/abs/1210.5721