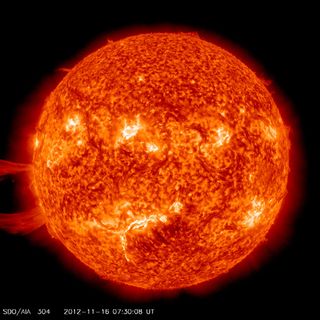 A giant solar prominence erupts from the sun on Nov. 16, 2012, in this image captured by NASA's sun-watching Solar Dynamics Observatory. The solar eruption was not aimed at Earth.
(Image: © NASA/SDO)

Astronomers are a step closer to figuring out a vexing problem with X-ray observations of the sun. There is less iron — specifically, less iron in one prominent spectral light feature — than expected.

The discrepancy arises whenever an X-ray telescope examines the sun's light spectrum, or that of any star. Highly charged iron dominates the sun's spectrum in certain wavelengths, according to researchers. But the iron is weaker than expected.

For decades, a debate has been raging regarding this. Some scientists think incomplete modeling of collisions in the sun's gas, or plasma, is why we see less iron than models predict. Others say the discrepancy is due to problems in how the atomic physics is calculated.

"This is something special [that we found]. This is no deviation," said Sven Bernitt, a researcher at the institute and the lead author of the paper. The research appears in the Dec. 13 edition of the journal Nature.

The challenge with looking at the sun (or any star, for that matter) is we can't easily get up close to measure its properties. Astronomers rely on spectroscopy — splitting light into its constituent wavelengths — to pick out the individual elements that make up a star.

The sun is mostly made up of hydrogen and helium, but there is a small but mighty iron core at its center. The amount of iron will increase as the sun gets older, as scientists have observed in other stars in the universe.

"All the information we get from a star is from the radiation," Bernitt said.

Experimentally reproducing the sun's environment in X-rays was difficult until fairly recently, Bernitt added. Only one facility capable of doing this exists in the world right now: Stanford University's Linac Coherent Light Source at the National Accelerator Laboratory.

The 2-mile long linear accelerator, also known as a linac or free electron laser, has created a new kind of X-ray pulsing laser made possible by pushing electrons to extremely high energy.

According to its creators, the accelerator's X-ray pulses are a billion times brighter than what humans were capable of generating previously in synchrotrons, a type of circular particle accelerator.

"This is the best light source of its kind in the world," Bernitt said. "It's really unique, so we saw our chance to go there and do an experiment."

Bernitt's team hauled a 3.5-ton electron beam ion trap — equipment that includes a magnetic chamber — from Germany by plane, and fitted it into the Stanford linac in California.

With dozens of hours of "beam time" to work with, the researchers produced a cloud of highly charged ions in their chamber. They shot X-rays on this ion cloud using the free electron laser, which allowed them to probe the atomic structure of the ions.

The researchers measured the "fluorescence intensity ratio," or the excitation, of two spectral features of the energized atoms. The instrument allowed them to study the excitation level of individual atoms without regard to the energy produced by particle collisions commonly found in the sun's plasma.

"It was a very clean, pure experiment," Bernitt said. His team found that iron excitation of one energy level was lower than expected, suggesting that the atomic calculations for iron will need to be refined.

No immediate follow-up work is planned due to the expense and time involved, Bernitt added, but his team hopes to resume work on this topic sometime in the future.

There is at least one institution in Germany that is planning a similar free electron laser. If it becomes functional, this could cut down on Bernitt's team's transportation costs.