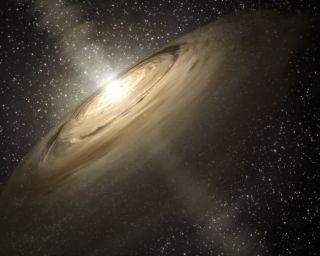 The basic moleculesof life are scattered through the universe, collecting in farawaygalactic clouds, on passing cometsand asteroids,and on the planets here in our solar system.

But scientistsstill don't know how these molecules came to be, or how they originally cametogether to form life. Now, for the first time ever, astronomers have foundsome of the basiccompounds necessary to build organic molecules, proteins, and DNA withinthe inner regions of a planet-forming disk.

"We see prebiotic organic molecules in comets and the gas giantplanets in our own solar system and wonder, where did these chemicals comefrom?" said Marc Kassis, support astronomer at the W.M. Keck Observatory. "The Spitzer Space Telescope is letting us study theseyoung stellar objects in new and revealing ways, giving us exciting clues aboutwhere life may form in the universe."

The object--IRS 46--is located in the Milky Way galaxy,about 375 light years from Earth, in the constellation Ophiuchus.

The researchersdetected two organic compounds--acetylene and hydrogen cyanide--in amounts nearly10,000 times higher than found in the cold interstellar gas where stars areborn. These compounds are commonly found in the atmospheresof the giant gas planets in our solar system, the icy surfaces of comets,and the atmosphere of Saturn's largest moon, Titan. They also detected carbondioxide, which is widespread in the atmospheres of Venus, Earth, and Mars.

The presence ofgas-rich disks around young stars is well known, but little is understood abouttheir chemical structure. The discovery of acetylene and hydrogen cyanide inone of these disks will help astronomers better understand them and wherefuture solar systems may someday form and possibly result in life.

"If you addhydrogen cyanide, acetylene and water together in a test tube, and give them anappropriate surface on which to be concentrated and react, you'll get a slew oforganic compounds including amino acids and a DNA purinebase called adenine," said co-author Geoffrey Blake of the CaliforniaInstitute of Technology in Pasadena. "Now, we can detect these same moleculesin the planet zone of a star hundreds of light-years away."

The dust and gassurrounding a young star blocks visible light, but lets longer wavelengths,such as infrared light, pass through. Astronomers can find out what this gasand dust is made of by separating the light into its component wavelengths.

Astronomers haveused this technique since study molecular compounds in protoplanetarydisks of young stellar objects. The Spitzer "c2d legacy program" has looked atmore than 100 sources in five nearby star-forming regions and only IRS 46 showed clear evidence of containing theorganic compounds in the warm regions close to the star where terrestrial planetsare most likely to form.

The results alsoindicate the presence of a stellar wind coming from the inner region of thedisk orbiting IRS 46. The wind may eventually blow away the dusty debris in thedisk, perhaps revealing the presence of rocky, Earth-like planets in severalmillion years.

"This infantsystem might look a lot like ours did billions of years ago, before life aroseon Earth," said study leader Fred Lahuis of Leiden Observatory in the Netherlands and the SRONNetherlands Institute for Space Research.

These findings willbe published in an upcoming issue of the Astrophysical Journal Letters.