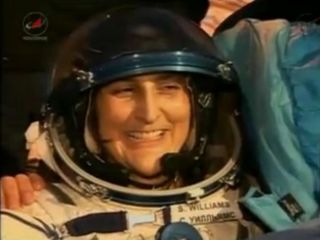 A Russian Soyuz space capsule made a rare nighttime landing in the frigid steppes of Kazakhstan early Monday, returning three astronauts to Earth after a four-month voyage to the International Space Station.

A timing glitch forced the capsule to overshoot its intended landing site slightly by a few miles, but made an otherwise smooth touch down at 7:56 a.m. local time — one hour before sunrise — on Monday (Nov. 19), NASA officials said. Because of time zone differences it was still Sunday night at NASA's space station Mission Control center in Houston.

Returning home on the Soyuz were NASA astronaut Sunita Williams, Russian cosmonaut Yuri Malenchenko and Japanese astronaut Akihiko Hoshide. The trio launched toward the station in mid-July and spent 127 days in space during their mission. [Soyuz Lands Safely with Station Crew (Photos)]

It was the first time in six years that a Soyuz spacecraft has landed at night, and only the fourth time in the 12-year history of Soyuz flights to the space station, Navias said. Some of the Soyuz's landing activities occurred a few seconds late, causing it to overshoot its landing site, but Russian recovery teams were able to compensate for the change during the descent, he added.

Weather at the landing site was overcast and freezing, with temperatures of 12 degrees Fahrenheit (minus 11 degrees Celsius), though it felt like 0 degrees F (minus 17 degrees C) with the wind, Navias said. The Soyuz capsule landed on its side, a common configuration, and recovery teams were expected to work quickly to retrieve the astronauts due to the cold weather.

Williams and her crew wore broad smiles after being extracted from their capsule. They sat in reclining seats under thick blankets to stay warm in the frigid cold before being moved to a inflatable medical tent for post-landing checks.

Williams, Malenchenko and Hoshide launched into orbit in mid-July, with Williams becoming the second female commander of the station when she took charge earlier this year. Williams, an avid runner, became ran the first triathlon in space during the mission, which also featured three spacewalks and the first official cargo delivery by a robotic Dragon spacecraft built by the U.S. company SpaceX.

"I think we've left this ship in good shape and I'm honored to hand it over to Kevin," Williams told Ford before presenting gifts to Expedition 34 crew in an emotional exchange. "As you can see, we have a great crew up her, us who are going home very shortly and the ones who are taking over. The ship's in good hands."

"It was a beautiful departure," Ford said of the Soyuz undocking. "It was just beautiful to watch the ship fly away."

Ford and his crew were able to watch a live video feed of NASA's coverage of the Soyuz landing. A camera on the space station's exterior also captured a dramatic view of the Soyuz capsule's super-hot plasma trail as it re-entered Earth's atmosphere.

Malenchenko completed his fifth spaceflight during the Expedition 32-33 mission and ended the flight with a career total of 646 days in space, placing him seventh in the ranks of most experienced spaceflyers.

While Williams and her crew readapt to life on Earth, the Expedition 34 crew still on the space station will prepare for a busy holiday season in orbit. The astronaut and cosmonauts are expected to celebrate the U.S. Thanksgiving holiday on Thursday (Nov. 22) and prepare for the arrival of three new crewmembers in mid-December.

The International Space Station is the largest manmade structure in space. It was built by five different space agencies representing the United States, Russia, Europe, Japan and Canada, with construction beginning in 1998. The $100 billion space station has been continuously occupied by a series of rotating astronaut crews since 2000.

This story was updated to correct the landing date of Monday, Nov. 19.