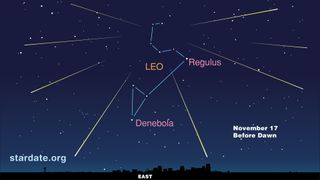 This sky map for the Leonid meteor shower of 2012 shows the location of the radiant (center) before dawn on Saturday, Nov. 17 - the peak viewing time.
(Image: © StarDate.org)

UPDATE: The peak of the 2012 Leonid meteor shower has passed. See the amazing views from stargazers here: Leonid Meteor Shower of 2012 (Photos )

This weekend brings us the return of the famous Leonid meteor shower, a meteor display that has brought great anticipation and excitement to night sky watchers around the world.

This will be a favorable year to look for the Leonid meteor shower because the moon will be only crescent and will have set in the west long before the constellation Leo begins to rise into the night sky. The Leonids appear to radiate out of Leo (hence their name), and with the moon out of the sky completely, viewing conditions could be perfect for stargazers with clear weather and dark skies.

You can watch the Leonid meteor shower live here on SPACE.com via NASA. The webcast is expected to begin by 7 p.m. EST (0000 Nov. 17 GMT).

The Leonid meteors are debris shed into space by the comet Tempel-Tuttle, which swings through the inner solar system at intervals of 33 years. With each visit the comet leaves behind a trail of dust in its wake. Much of the comet’s old dusty trails litter the mid-November part of Earth’s orbit and the Earth glides through this debris zone every year.

Occasionally, Earth passes directly through an unusually concentrated dust trail, or filament, which can spark a meteor storm resulting in thousands of meteors per hour. That’s what happened in 1999, 2001 and 2002.  Since the Tempel-Tuttle comet passed the sun in 1998, it was in those years immediately following its passage that the Leonids put on their best show.

But now, the comet and its dense trails of dust have all receded far outside Earth's orbit and back into the outer regions of the solar system. So odds are that there is little, if any chance of any unusual meteor activity. [Photographer Spots Early Leonid Meteors (Video)]

Peak times to see the Leonids

In the 2012 Observer’s Handbook of the Royal Astronomical Society of Canada, meteor experts Margaret Campbell-Brown and Peter Brown, indicate that this year’s peak activity should occur on Saturday morning, Nov. 17, at about 3 a.m. ET (0800 GMT). This is the moment when the Earth will be passing closest to the orbit of the long-departed comet, and when our planet seemingly is most likely to encounter some residual comet material. This time is highly favorable for North Americans, especially those in the eastern United States and eastern Canada. [Top 10 Leonid Meteor Shower Facts]

But while Leonid rates are unpredictable, it is unlikely that more than 10 to 20 meteors per hour may be seen this year.

Other meteor researchers, however, such as Jeremie Vaubaillon of France, and  Mikhail Maslovof Russia have examined Leonid prospects for this year and also suggest watching for some meteor activity three days later, on Tuesday morning, Nov. 20.

For example: Sometime around 1 a.m. EST (0600 GMT), the Earth may interact with material that was shed by comet Tempel-Tuttle back in the year 1400. But at best, only about 15 to20 Leonids per hour may be seen.

Although the Earth will pass almost directly through the center of this supposed cloud of comet dust, the fact that it is situated far from the parent comet, plus gravitational perturbations affecting these particles after making 18 trips around the Sun, dictate that any meteor activity will be sparse at best. Eastern North America appears to be in the best position to see any possible Leonid activity.

The meteor shower will appear to emanate from out of the so-called "Sickle" of Leo, but prospective viewers should not concentrate on that area of the sky around Leo, but rather keep their eyes moving around to different parts of the sky.

It is best to bundle up warmly again the chill of mid-November night and to lie down on a lawn chair wrapped inside a blanket or observe from the comfort of a sleeping bag. A thermos of a hot beverage such as coffee, tea or soup makes a good companion.

Because Leo does not start coming fully into view until the after midnight hours, that will be the best time to concentrate on looking for the Leonid meteors. The hours after midnight are generally best for watching for "shooting stars" anyway, because before midnight we are riding on the back side of the Earth in its orbit around the sun, whereas after midnight we are on the front or advancing side.

After midnight the only meteoroids escaping collision are those ahead of the Earth and moving in the same direction with velocities exceeding 18.5 miles per second. All others we will either overtake or meet head-on. But before midnight, when we are on the backside, the only meteoroids we encounter are those with velocities high enough to overtake the Earth. Therefore, on the average, morning meteors appear brighter and faster than those we see in the evening.

And because the Leonids are moving along in their orbit around the sun in a direction opposite to that of Earth, they slam into our atmosphere nearly head-on, resulting in the fastest meteor velocities possible: 45 miles (72 kilometers) per second. Such speeds tend to produce bright meteors, which leave long-lasting streaks or trains in their wake.