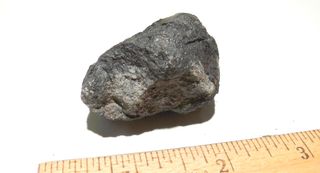 This rock, found in a Novato, Calif. woman's backyard, was thought to be a meteorite deposited by an Oct. 17, 2012 meteor, but is in fact just a rock.
(Image: © P. Jenniskens SETI Institute/NASA ARC)

A rock thought to be a meteorite from a recent fireball seen over Northern California is in fact, just a regular Earth rock, scientists report.

The stone had excited researchers, as it seemed to present the first specimen deposited by a meteor that lit up the night sky over the San Francisco Bay Area on Oct. 17. Novato, Calif. resident Lisa Webber, a nurse at the University of California, San Francisco Medical Center, read about the fireball and recalled hearing a sound on her roof that night. Sure enough, she and neighbors found a ding on the roof and a likely-looking rock in her backyard.

Peter Jenniskens, head of the CAMS (Cameras for Allsky Meteor Surveillance) project, which is jointly run by NASA and the SETI (Search for Extraterrestrial Intelligence) Institute, came to investigate, and thought the 2.2 ounce (63 grams) rock was a meteorite, based on its apparent density and response to a magnet. However, follow-up analysis under a microscope revealed that the "meteorite" was a meteorwrong.

"I sincerely thought it was, based on what appeared to me was remnant fusion crust," Jenniskens wrote in a statement on the CAMS site. "On closer inspection, that crust was a product of weathering of a natural rock, not from the heat of entry."

Examination of the rock under a petrographic microscope quickly revealed the stone was not a meteorite, Jenniskens said. Still, the ding on Webber's roof, along with her recollection of the sound she heard that night, suggest her house may in fact have been hit by a still-missing meteorite.

"Today, I apologized to Lisa Webber and together we searched the area around the house in the hope of finding the elusive rock that hit the roof, but no luck, so far."

Scientists have not given up hope of finding a meteorite from the fall that created the Oct. 17 night sky display. They believe the space rock traveled through Earth's atmosphere from east of San Rafael and continued over west Novato, toward Sonoma.

The fireball occurred at 7:44:29 p.m. PDT (10:44 p.m. EDT), and was captured in cell phone videos and photos. However, material from the fall remains elusive.

Editor's Note: If you snapped a photo of the Oct. 17 meteor and would like to share it with SPACE.com, please send images, comments and your location info to managing Editor Tariq Malik at: tmalik@space.com.