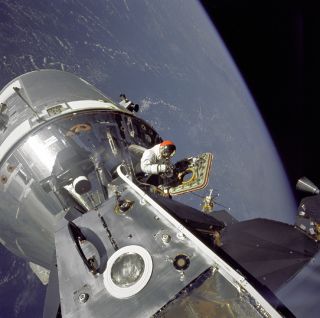 Astronaut Russell L. Schweickart, Lunar Module pilot, took this photograph of Scott during his EVA as he stood on the porch outside the Lunar Module.

Apollo 9 was an Earth orbital mission designed to test docking procedures between the CSM and LM as well as test fly the Lunar Module in the relative safe confines of Earth orbit.