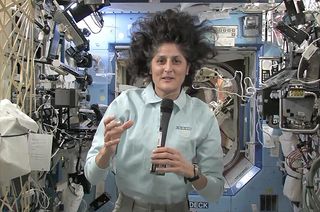 Expedition 33 commander Sunita "Suni" Williams takes part in an interview with collectSPACE.com from on board the International Space Station on Oct. 19, 2012.
(Image: © NASA TV)

For NASA astronaut Sunita "Suni" Williams, who tonight (Oct. 22) will mark her 100th day in space since lifting off in July, the International Space Station has become her and her two Expedition 33 crewmates' home.

"It's definitely our home at this point in time," Williams told collectSPACE.com in a televised interview from aboard the station. "We have our little things scattered here and there and we know where they are."

"I think we need to clean up before the next crew comes here, like when you have visitors at your house, you want to take this weekend or the weekend before they arrive to clean up," she said while floating inside the "Destiny" U.S. laboratory module.

Sunita Williams is the space station's 33rd commander and only the second woman to lead the outpost since the first crew took up residency on the outpost in 2000. She currently shares the space station with flight engineers Yuri Malenchenko of Russia and Japan's Akihiko "Aki" Hoshide. [Photos: Inside the Station's Expedition 33 Mission]

Three new crewmembers, astronaut Kevin Ford and cosmonauts Oleg Novitskiy and Evgeny Tarelkin, are set to arrive at the space station later this week. The Russian Soyuz rocket that will launch them on Tuesday (Oct. 23) was rolled out Sunday at the Baikonur Cosmodrome in Kazakhstan.

"Well, it's sort of quiet up here, which is sort of nice, with just three — but we are really seriously looking forward to the next crew coming up here. It always adds a little more dynamic an atmosphere when people are flying around," Williams said. "Being a crew of three was really nice also, of course, sort of calmed everything down, made things a little more relaxed, even though we still had some dynamic ops."

"But we're ready for our guests and the new residents of the International Space Station, Kevin, Oleg and Evgeny," she added. "It is going to be great to have them up here and like I said, we're cleaning house and making sure it is all ready for them."

At home in zero-g

Expedition 33 is Williams' second stay on the International Space Station. She previously lived there for more than six months during Expedition 14 from December 2006 to June 2007. [Astronaut Suni Williams' Space Triathlon (Video)]

She told collectSPACE.com that after 100 days into her current mission, she's not missing gravity.

"I love being up here and I love floating around," Williams said. "I think the mindset really is you know it is not going to last forever, so I think you take an advantage of flying around as much as possible."

Sometimes her mindset reverts however, to how she'd do things on Earth.

"It took a little while to get used to falling asleep without laying down on a bed or having a pillow," Williams shared. "Still, every now and then, you take a bag of nuts and go like this, holding it up in the air to have them fall in your mouth, and that's not going to work."

"Some of those small unconscious things catch you off guard but being in microgravity and flying around in space is priceless. I think we're cherishing every moment we have of it," she said.

Williams will return from space next month, which may not be enough time to shake of all her subconscious gravity ingrained cues. Future space station crews however, may truly find themselves immersed in weightlessness as they spend a year away from Earth to gather the data needed for even longer missions into the solar system.

"The International Space Station is a great place to live for a year," Williams said. "There's lots to do here: there's science experiments; there's working on the 'house' — every now and then something breaks; there's crews and it's dynamic, you know, changing crews, so it would really be a good place to do that."

"And if we're looking for the biological, human-side of it — what happens to the human body over that length of a time — this is the perfect place to do that. We have all the monitoring here to figure out every step of the way what happens," Williams said.

Williams added that there is no shortage of interest by potential crew members for the yearlong mission, which according to NASA is targeted to launch in 2015.

Although a yearlong mission is still a few years to come, crews aboard the station have logged 12 continuous years aboard. Since Nov. 2, 2000, when the Expedition 1 crew arrived, there has always been a multi-national crew of at least two people aboard the orbiting laboratory.

To Williams, the past dozen years and 33 crews serve as a model for working together on Earth and moving further out into space.

"I was lucky enough to be there at the launch of the first expedition crew to the International Space Station, so I can tell you just from personal relationships with people and partners from all the different agencies, we've come a long way," she told collectSPACE.com. "Of course we've trusted in each other before building the space station and throughout the whole process while it was being built, that has just been capitalized on throughout the past decade."

"As crew members, we've gotten to know each other really well as international partners for sharing information and engineering ideas and learning from each other about how other people tackle problems. I think that has just been accelerated throughout this program.

"I think it is a role model program for many, many other international programs on the ground," Williams said.

"And with that, one of my own personal feelings is that when you leave the planet, you sort of leave the planet as a human being. You don't necessarily leave it as a guy from this country or that country. So hopefully when we are going to other planets a little bit away from Earth, we'll be leaving as human beings."

Click through to collectSPACE.com to watch the full interview with Expedition 33 commander Sunita “Suni” Williams from on board the International Space Station.