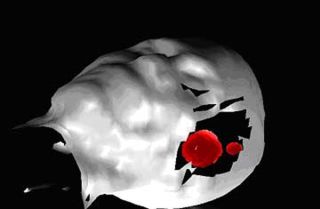 Earthly spin-offs of technology developed for space travel has long been a bonus for nations lofting humans and machines into orbit.

But two new machines developed with the help of NASA and the European Space Agency (ESA) have found their way into hospitals on Earth, where physicians have put them to use sniffing out harmful microbes and probing patients' skulls.

In Europe, Russian air scrubbers built for the space station Mir - and later installed aboard the International Space Station (ISS) - have been integrated into hospitals to protect staff and patients alike from airborne spores, bacteria and viruses. Dubbed Immunair, the system creates a personal "clean room" that can be deployed around children to ward off infection or protect against biological agents like small pox and anthrax.

"I do believe that it could have a fantastic impact on medicine," Pierre Brisson, head of ESA's technology transfer program, told SPACE.com. "It yields more than a 99.9 percent reduction of bacteria in an environment."

In California, NASA engineers are working alongside neurosurgeons to turn an infrared video camera normally used to study the Earth into a tumor-hunting brain scanner.

"It's pretty much like an infrared microscope," explained Sarath Gunapala, the camera's lead engineer at NASA's Jet Propulsion Laboratory (JPL) in Pasadena, California. "And it's totally non-invasive."

Developed for ground-use by the France-based firm AirInSpace, the Immunair portable clean room is an evolution of the Plasmer device originally constructed by Russian engineers to protect the air breathed by Mir cosmonauts from biological contamination.

Plasmer air scrubbers pass contaminated air through a series of strong electric fields and cold-plasma chambers to collect and kill bacteria, molds, fungi and other microorganisms. Bulky versions of the device were first invented in the 1990s and installed first on Mir in 1997 and then aboard the Russian Zvezda module of the ISS in April 2001.

"We knew the technology was capable for eliminating a wide range of microbes," said Laurent Fullana, general manager for AirInSpace, in a telephone interview.

The system successfully screened anthrax and small pox substitutes from the air in laboratory tests and cleared a hospital room full of fungi spores in minutes, he added.

With support from ESA, which provided market research, funds and the industrial suppliers, AirInSpace successfully created the portable Immunair that can be folded and wheeled through hospital corridors like an elementary school blackboard, then set up around an individual patient's bed.

To date, five European hospitals have portable Immunair systems on hand, some for emergency use and others to protect children with leukemia and bone marrow transplants from potentially fatal infections that could arise while their immune systems are suppressed.

While European researchers work to stamp out airborne particles, a team of JPL engineers and neurosurgeons are hoping their infrared camera will lead to more accurate surgical procedures by isolating tumors from surrounding brain tissue.

Brain tumors run slightly hotter than their surrounding tissue due to their differing metabolic level, said the study's lead scientist Babek Kateb, a research fellow at the University of Southern California's Keck School of Medicine.

By tracking that thermal difference, surgeons will be able to determine definite boundaries between diseased tumor cells and normal brain matter.

Using a quantum well infrared photodetector (QWIP), the JPL camera is sensitive enough to catch even the smallest variation in temperature - just one hundredth of a degree Celsius - in brain tissue, Gunapala said. The imager also is strong enough to provide high-definition television (HDTV) quality imagery at sensitivities down to about two cells, he added.

Researchers said the eventual goal is to incorporate infrared cameras into the microscopes currently used by surgeons to track their tumor removals, allowing doctors to switch between the two during an operation to monitor their progress.

"The goal is something like a military heads-up display, but with a microscope," explained JPL's Wolfgang Fink, who is designing the tumor tracking infrared software. In addition to the infrared camera, researchers are also incorporating ultraviolet capabilities to scan tumors at different wavelengths, he added.

Fullana said that the Immunair system is just one example of how space research can lead to practical, and potentially life-saving, tools on terra firma.

"It's amazing the number of fields that can benefit this," adding that Europe's auto and food industry's have seen offshoots from the continent's international space program. "Though the challenge is always to make it cost effective."

The lasers behind LASIK eye surgery, for example, stem from laser radar research to help spacecraft rendevouz in orbit. A personal health monitoring system called MedStar, developed to track the vital signs of space station astronauts, is being applied to patients with chronic health problems.

"I truly believe that this type of discipline action between engineers and neuroscience is the key to our success" Kateb said, adding that he hopes such cooperation continues on a more national level. "Together, the medical community and space engineers could achieve incredible results."