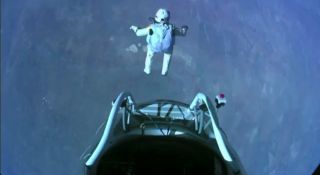 Astronauts in the United States and Europe sent congratulations to Austrian skydiver Felix Baumgartner today (Oct. 14), showering the daredevil with praise after he broke the world record for the highest skydive during a harrowing supersonic freefall.

Baumgartner, 43, set the new record for the world's highest skydive when he jumped from an altitude of 128,097 feet (39,044 meters) — the equivalent of just over 24 miles (39 kilometers) —and broke the sound barrier during his long descent back to Earth. The daring supersonic jump caught the eye of professional astronauts, even if Baumgartner did not leap from the official edge of space 62 miles (100 km) up.

Baumgartner's jump, called the Red Bull Stratos mission, was sponsored by the energy drink of the same name and webcast live, with camera views from the ground and from the skydiver's capsule. [Photos: Skydiver's Makes Record 24-Mile Supersonic Jump]

" I didn't feel a sonic boom because I was so busy just trying to stabilize myself," Baumgartner said in a statement after landing, adding that he went into a tough spin at the jump's beginning. "It was really a lot harder than I thought it was going to be."

Baumgartner broke the record for the world's highest skydive, longest freefall without a drogue cute, highest manned balloon flight and fastest freefall during the leap, which began with a balloon launch from Roswell, N.M.

Red Bull Stratos officials said that in addition to breaking several standing records, the project was aimed at understanding how the human body responds to the extreme environment near the edge of space.

ESA astronaut Jean-Francois Clervoy of France said the jump could help future astronaut escape systems, adding that the jump was something that he'd also thought about in the past.

"My dream of coming back from space by foot is about to be realized," Clervoy wrote as astro_JFrancois. "This is just like a spacewalk, but on a vertical orbit."

Several NASA and ESA astronauts appeared to be following Baumgartner's skydive attempt live. Some noted that the skydiver was the fourth-highest person near Earth, beat only by the three astronauts living on the International Space Station, which orbits more than 240 miles (386 km) above the planet.

ESA astronaut Samantha Cristoforetti, an Italian Air Force officer who writes on Twitter as Astro_Samantha, repeatedly posted links to the live Red Bull Stratos webcast to ask the public (and her fellow astronauts) if they were watching. She marveled at the live views of Earth from more than 24 miles.

"Records are made to be broken," Kittinger said in a post-jump news conference. "And a better champion could not have been found than Felix Baumgartner."

Praise for Baumgartner's leap did not only come from individual astronauts. ESA and NASA also weighed in on the jump.

"Congratulations … from all of us at ESA!" the European Space Agency wrote via Twitter.

"Congrats Felix Baumgartner and #spacejump team. We're working on supersonic flight for the rest of us - with a plane!" added officials at NASA's Langley Research Center in Langley, Va., which is researching future supersonic flight concepts.

"Felix is a truly brave explorer, and his jump will benefit space exploration," Whitesides wrote.