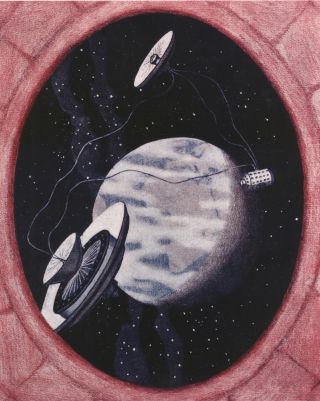 In this historical photo from the U.S. space agency, a 1929 Hermann Noordung image depicts a three-unit space station as seen from a space ship. Hermann Potocnik (1892-1929), also known as Herman Noordung, created the first detailed technical drawings of a space station.

The three units were the habitat, the machine room, and the observatory, each connected by an umbilical. The Earth is in the background, approximately 26,000 miles away. The station in this image is roughly above Cameroon's southern tip, in a geosynchronous orbit on the median of Berlin.