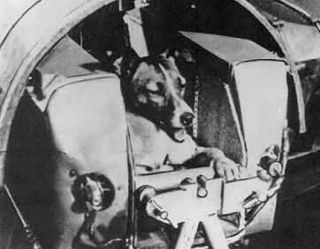 This photo depicts Russia's Laika, the first dog in space, which launched on the Soviet Union's Sputnik 2 mission in November of 1957.
(Image: © NASA)

PARIS — Russia, the United States and China took remarkably similar amounts of time — between 11.5 and 13.6 years — from their first launches of animals to when their astronauts first docked with habitable unmanned modules, according to the Secure World Foundation (SWF).

In a Sept. 5 publication, the Broomfield, Colo.-based organization said it performed the analysis following a widely held misimpression that China, the latest to have performed the feat — the Shenzhou 9 missionin June of this year — has moved much faster than Russia and the United States in manned space.

SWF acknowledged that there are lots of ways of measuring progress in manned space programs, and that the three nations did not follow the same routes to being able to prove their ability to send astronauts to space station modules.

But using this particular metric, despite the nearly half-century between the Russian and U.S. efforts and that of the Chinese, the three nations’ accomplishments appear to be not so different.

China’s Shenzhou 2 mission–carrying a monkey, a dog and a rabbit — was in January 2001, with the Shenzhou 9 docking some 12.7 years afterward.