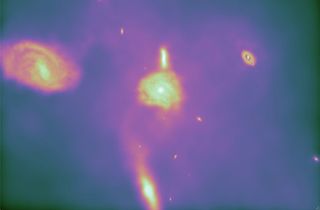 Building a universe from scratch that brims with galaxies resembling those around us is now possible on supercomputers for the first time, researchers say.

Our galaxy, the Milky Way, is a spiral galaxy with a broad disk and outstretched arms, as are many in our cosmic neighborhood, such as Andromeda, the Pinwheel and the Whirlpool galaxies. Spiral galaxies are common, but past computer models that aimed to accurately simulate the birth and evolution of the universe over billions of years had trouble creating them. Instead, they often generated lots of blobby galaxies clumped into balls.

New computer simulations can now recreate the kind of galactic communities seen in our universe, starting with the observed afterglow of the Big Bang and evolving forward in time. Harvard's Odyssey supercomputer allowed simulations that compressed nearly 14 billion years into only a few months.

"We've created the full variety of galaxies we see in the local universe," said study author Mark Vogelsberger at the Harvard-Smithsonian Center for Astrophysics. [Galaxy Construction by Supercomputer (Video)]

The new software is called Arepo and was created by Volker Springel at the Heidelberg Institute for Theoretical Studies in Germany. Previous simulations divided space into a fixed grid of cubes, with each cube simulating the behavior of substances within that space.

Arepo uses a grid that can reshape itself, filling itself with tetrahedrons of varying size and shape (a tetrahedron is a four-sided object resembling a pyramid). The more substance a region contains, such as gas, stars, dark matter or dark energy, the more tetrahedra Arepo devotes to that region, which enables it to simulate the behavior and flow of these substances more accurately.

"We took all the advantages of previous codes and removed the disadvantages," Springel said.

"I would like to add that the simulations we've run with our software represent a universe or slice of the universe that has many properties similar to our own, but it's not necessarily the same universe," astrophysicist Paul Torrey at the Harvard-Smithsonian Center for Astrophysics told SPACE.com. "While you may find many galaxies like the Milky Way in it, you won't find the Milky Way itself."

In the future, the researchers aim to simulate much larger volumes of the universe at unprecedented resolution, creating the largest and most realistic model of the universe yet.

"That way, we hope to gain more insights on galactic formation," Torrey said.

The scientists detailed their findings in the Aug. 21 issue of the journal the Monthly Notices of the Royal Astronomical Society.