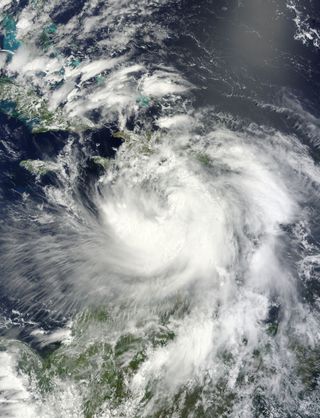 NASA has postponed the liftoff of two space radiation satellites to no earlier than Aug. 30 due to expected stormy fallout from Tropical Storm Isaac, space agency officials said today (Aug. 25).

With Tropical Storm Isaac expected to reach hurricane strength this weekend, mission managers for the twin Radiation Belt Storm Probes (RBSP) opted to roll the Atlas 5 rocket carrying the $686 million satellites back inside its protective hangar for safekeeping.

"This will ensure the launch vehicle and twin RBSP spacecraft are secured and protected from inclement weather," NASA officials said in a statement.

Tropical Storm Isaac is expected to reach hurricane strength today or tomorrow as it moves northwest, just east of Florida, on a course toward the state's panhandle, according to a National Hurricane Center forecast. Currently, the storm is about 95 miles (159 kilometers) east-southeast of Guantanamo, Cuba, with maximum sustained winds of 60 miles per hour (95 kph). [Amazing Photos from Inside Tropical Storm Isaac]

Saturday's postponed launch was the second delay in two days for the Radiation Belt Storm Probes mission. An issue with a rocket tracking beacon, needed to monitor the mission's Atlas 5 rocket during liftoff, thwarted a Friday launch  attempt late in the countdown.

Earlier this week, NASA also pushed back the first launch try by 24 hours, to Friday, to allow time to clear up a separate technical concern with the Atlas 5 rocket.

NASA's Radiation Belt Storm Probes mission is a two-year project to study the radiation belts around Earth. These belts, called the Van Allen Belts, are regions of harsh radiation that can be affected by strong solar storms that can pose a threat to satellites and astronauts in orbit, as well as communications and power infrastructure on Earth, mission scientists have said.