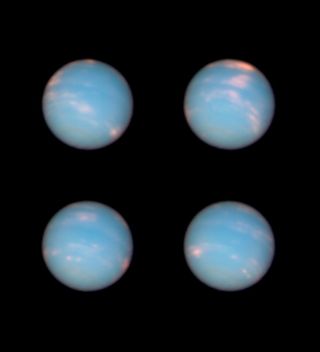 These four Hubble images of Neptune were taken with the Wide Field Camera 3 on June 25-26, 2011, during the planet's 16-hour rotation. The snapshots were taken at roughly four-hour intervals, offering a full view of the planet. The images reveal high-altitude clouds in the northern and southern hemispheres. The clouds are composed of methane ice crystals.
(Image: © NASA, ESA, and the Hubble Heritage Team (STScI/AURA))

Neptune may be one of the tougher planets for skywatchers to see, but spotting the faraway world is about to become much easier — at least for today (Aug. 24).

The Internet-based Slooh Space Camera will stream live telescope views of Neptune today as it reaches opposition — a point when the planet is exactly opposite the sun in Earth's sky — during a free webcast.

The Neptune webcast will begin at 7 p.m. EDT (2300 GMT) tonight and feature views from an observatory in the Canary Islands, off the west coast of Africa. At the time, Neptune will be about 2.7 billion miles (4.4 billion kilometers) from Earth, but it is still one of the planet's best showings of the year.

The webcast can be accessed at the Slooh website here: http://www.slooh.com

You can also watch it below here:

Neptune is the eighth planet from the sun in our solar system. Since Pluto is now considered a dwarf planet, Neptune is the farthest full-fledged world in our planetary neighborhood. [Amazing Photos of Neptune]

Neptune can be seen all night long tonight, though you will likely need binoculars or a small telescope to see it for yourself. A 2-inch diameter telescope, or 7x50 or 10x50 binoculars, are needed to resolve the planet as a blue-green disk of light.

Currently, Neptune can be found in the constellation Aquarius, as seen in the sky map below:

Editor's note: If you snap an amazing telescope view of Neptune or any other night sky object, that you'd like to share for a possible story or image gallery, send images and comments (including name and location) to managing editor Tariq Malik at tmalik@space.com.