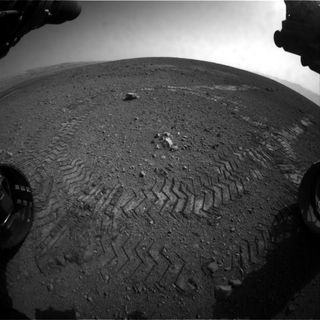 This photo captures the tracks made by the Mars rover Curiosity's historic first test drive on the Red Planet.

After sitting still for more than two weeks, Curiosity drove forward 15 feet (4.5 meters), rotated 120 degrees and then reversed 8.2 feet (2.5 m) on Aug. 22, 2012. The brief jaunt served as a test of the six-wheeled robot's driving and steering systems.

Curiosity has now begun its first big drive, trekking toward a spot 1,300 feet (400 m) away called Glenelg. This site, where three different types of terrain come together, is the rover's first major science target. It will take several weeks to reach, researchers have said.

The $2.5 billion Curiosity rover landed inside the Red Planet's Gale Crater on Aug. 5. Its two-year mission seeks to determine whether Mars could ever have supported microbial life.

Curiosity carries 10 different science instruments and 17 cameras. This image was snapped by one of its Hazard-Avoidance cameras, or Hazcams, which help the rover and its drivers avoid obstacles as Curiosity chugs along.