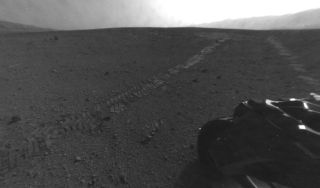 This photo from NASA's Mars rover Curiosity was taken on Aug. 28, 2012, after the rover drove 52 feet (16 meters) to begin its weeks-long drive east to the first science target Glenelg. It's the rover's longest drive yet.
(Image: © NASA/JPL-Caltech)

Curiosity headed off eastward Tuesday (Aug. 28) toward a spot called Glenelg, where three different types of terrain come together in one place. The 52-foot (16-meter) drive marks the rover's first big move away from "Bradbury Landing," where Curiosity touched down on the night of Aug. 5.

"This drive really begins our journey toward the first major driving destination, Glenelg, and it's nice to see some Martian soil on our wheels," mission manager Arthur Amador, of NASA's Jet Propulsion Laboratory in Pasadena, Calif., said in a statement. "The drive went beautifully, just as our rover planners designed it."

Curiosity had made two short drives before Tuesday's big move. These previous jaunts tested the rover's mobility system and positioned it to study a patch of ground scoured by Curiosity's rocket-powered "sky crane" descent stage, which lowered the six-wheeled robot to the Martian surface on cables. [Photos: Curiosity's First Drive on Mars]

Glenelg is about 1,300 feet (400 m) away, so it'll take Curiosity a while to get there, especially since researchers plan to make some stops along the way.

"We are on our way, though Glenelg is still many weeks away," said Curiosity lead scientist John Grotzinger, of Caltech in Pasadena. "We plan to stop for just a day at the location we just reached, but in the next week or so we will make a longer stop."

During that longer stop (at a yet-to-be-determined site), Curiosity will test out its robotic arm and some of the instruments that it carries, such as the Alpha Particle X-ray Spectrometer, officials said.

The rover's stay at Glenelg promises to be even longer. Mission scientists are eager to study the diverse set of geological formations at the site, and they will likely use Curiosity's drill — which can bore 1 inch (2.5 centimeters) into solid rock — there for the first time.

The $2.5 billion Curiosity rover landed Aug. 5 inside Mars' huge Gale Crater, tasked with determining if the area could ever have supported microbial life. The 1-ton robot carries 10 science instruments to help it answer this question.

While Curiosity will spend a fair chunk of time at Glenelg, its main science target is the base of Mount Sharp, the 3.4-mile-high (5.5-kilometer) mountain rising from Gale Crater's center. Mars-orbiting spacecraft have spotted mineral evidence that Mount Sharp's foothills were exposed to liquid water long ago.

Curiosity may be ready to start the 6-mile (10-km) trek toward Mount Sharp's interesting deposits by the end of the year, Grotzinger has said, though he stressed that timeline is speculative.