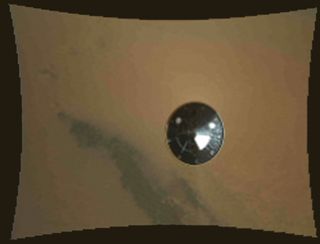 This color thumbnail image was obtained by NASA's Curiosity rover during its descent to the surface of Mars on Aug. 5 PDT (Aug. 6 EDT). The image was obtained by the Mars Descent Imager instrument known as MARDI and shows the 15-foot (4.5-meter) diameter heat shield when it was about 50 feet (16 meters) from the spacecraft.
(Image: © NASA/JPL-Caltech/MSSS)

The Curiosity rover's landing video was taken by the Mars Descent Imager camera, or MARDI, which snapped hundreds of photos while the six-wheeled robot was barreling through the Martian atmosphere during its "seven minutes of terror" landing attempt late Sunday night (Aug. 5 PDT; Aug. 6 EDT).

The rover team combined 297 of these shots into a 1-minute video that shows some of the unprecedented descent's most dramatic moments. Highlights include the separation of Curiosity from its heat shield, and billowing dust clouds raised as the rover's rocket-powered sky crane — which lowered Curiosity to the ground on cables — neared the Martian surface.

The first images were taken about 2.5 minutes before Curiosity touched down on the surface of Mars. In one of them, the heat shield is seen in the frame, falling away from the spacecraft. The photo, which was taken about three seconds after the heat shield separated, is among the first color images Curiosity sent back from Mars, NASA officials said.

The video of Curiosity's descent is a bit fuzzy, because the MARDI images were compressed substantially before Curiosity sent them back to Earth. The full-resolution photos should be spectacular, but they'll take a while to trickle in, said MARDI principal investigator Mike Malin. [Gallery: Mars Rover Curiosity Landing Success ]

"That video would be just exquisite in full frame," Malin, of Malin Space Science Systems in San Diego, told reporters here at NASA's Jet Propulsion Laboratory today (Aug. 6). "It'll be a couple of weeks before we really start having the pieces for it."

MARDI, which sits on the bottom of the rover's body and faces downward, is one of Curiosity's 17 cameras. Its main job was to take footage of the rover's descent to its landing site — the 96-mile-wide (154-kilometer) Gale Crater — to give the mission team a bird's-eye view of the terrain Curiosity will explore.

Curiosity is the heart of NASA's $2.5 billion Mars Science Laboratory mission (MSL), which seeks to determine if the Red Planet can, or ever could, support microbial life.

The rover has also already beamed home images taken by some of its other cameras. For example, a shot snapped by one of the rover's eight Hazard Avoidance Cameras, or Hazcams, shows Gale and its mysterious central mound, the 3-mile-high (5-kilometer) Mount Sharp.

MSL scientists plan to send Curiosity partway up Mount Sharp, to study the many layers of rock that hold a record of perhaps a billion years of changing environmental condtitions on Mars.

However, the car-size rover is not ready to tackle Mount Sharp's slopes quite yet. The mission team will spend the next few months checking out Curiosity's systems and 10 science instruments, which will be gathering data all the while.

Curiosity probably won't start driving for the first time for a few weeks, and it likely won't begin its trek toward Mount Sharp for another two or three months, mission managers have said.