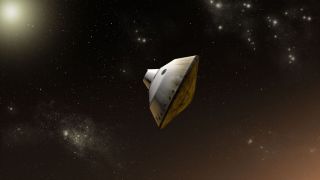 PASADENA, Calif. — After 8 1/2 months crossing the millions of miles between planets, the biggest and most complex rover ever sent to another world is now on its final approach for a hair-raising touchdown on Mars.

NASA's 1-ton Curiosity rover is set to land inside the Red Planet's Gale Crater at 10:31 p.m. PDT tonight (Aug. 5; 1:31 a.m. EDT and 0531 GMT on Aug. 6). As with any planetary landing, success is not a given, and tensions may be especially high tonight given Curiosity's elaborate, unprecedented landing sequence.

Curiosity's descent stage will lower the enormous rover to the Martian surface on cables, then fly off to crash-land intentionally a safe distance away. Engineers have dubbed the entire sequence "seven minutes of terror," because that's how long it'll take from atmospheric entry to touchdown.

The sky crane method may sound crazy, but it's the best way to land a rover of Curiosity's bulk on Mars, mission engineers said. [Photos: How Curiosity's Risky Landing Works]

"We've become quite fond of it, and we're fairly confident that Sunday night will be a good night for us," Adam Steltzner, of NASA's Jet Propulsion Laboratory in Pasadena, Calif., told reporters Thursday (Aug. 2). Steltzner is entry, descent and landing phase lead for Curiosity's $2.5 billion mission, which is known as the Mars Science Laboratory.

Two spacecraft, the Mars Odyssey probe and Mars Reconnaissance Orbiter, will watch Curiosity's landing from the Red Planet as NASA's Deep Space Network if antennas listens in from Earth.

If all goes well tonight, Curiosity will soon begin roaming around its landing site, using 10 different science instruments to search for signs that the Gale area is, or ever was, capable of supporting microbial life.

Curiosity is not a life-detection mission, but its discoveries should pave the way for future efforts along those lines, NASA officials said.

The rover will spend a lot of time investigating Mount Sharp, the mysterious 3-mile-high (5-kilometer) mountain that rises from Gale's center. Mars-orbiting spacecraft have spotted signs of clays and sulfates near the mound's base, suggesting that its lower reaches were exposed to liquid water long ago.

"It's a transition mission, from 'follow the water' of the last decade to seeking the signs of life and heading towards sample-return, which is what the National Academy of Sciences' Decadal Survey recommended as the next major step in the exploration of Mars and the exploration of the solar system," said Doug McCuistion, director of NASA's Mars Exploration Program.

NASA is also hoping that the rover's two-year mission will help reinvigorate the agency's planetary science exploration program, which suffered deep cuts in the proposed 2013 federal budget released by the White House in February.

The cuts forced NASA to temporarily shelve plans for ambitious future multibillion-dollar planetary missions and drop out of a European-led effort to send an orbiter and rover to Mars in 2016 and 2018, respectively. NASA officials have said they hope Curiosity's findings generate enough excitement among the public and politicians to bring some of the lost funding back.