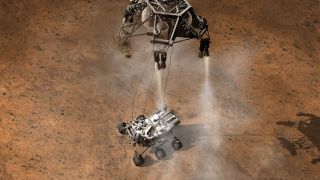 This illustration depicts the moment immediately after the Curiosity rover touches down on the Red Planet.
(Image: © NASA)

NEW YORK — NASA's biggest Mars rover landing yet is about to hit Broadway.

The broadcast begins at 11:30 p.m. EDT Sunday night and runs until 4 a.m. EDT Monday morning (Aug. 6). The exact time of landing is scheduled for 1:31 a.m. Aug. 6 EDT (0531 GMT), though it will be late Monday night at the rover's California-based mission control room.

"In the city that never sleeps, the historic Times Square will be the place for New Yorkers to participate in this historic landing," John Grunsfeld, NASA's associate administrator for science missions, said in a statement today (July 31). "When you think of all the big news events in history, you think of Times Square, and I can think of no better venue to celebrate this news-making event on Mars." [Mars Rover's Nail-Biting Landing in Pictures]

NASA Curiosity probe is a Mini Cooper-size rover designed to spend two years exploring the vast Gale Crater in pursuit of some of Mars' biggest mysteries, including the question of whether water, and maybe even life, ever existed there. The rover launched in November 2011 and is now poised to land in a nail-biting maneuver this weekend involving a hovering rocket-powered "Sky Crane" that will lower the vehicle to Mars' surface via tethers.

The landing broadcast will originate from Mission Control at NASA's Jet Propulsion Laboratory's in Pasadena, Calif., which designed the rover and is managing the mission. If the landing is successful, viewers will be able to see scientists receive the first signal from the rover on Mars.

The audio track for the broadcast will be carried on the online radio station Third Rock Radio, which can be accessed from the NASA homepage at and through the Tuneln mobile app.

"We're pleased the Toshiba Vision screens will offer a unique view of this great scientific achievement, the landing of the rover Curiosity on Mars," said Eddie Temistokle, senior manager of corporate communications and corporate social responsibility for Toshiba America Inc.

Other sites around the country, including many of the NASA centers, will also host live viewing events for the landing, which is NASA's most ambitious and expensive planetary mission on the horizon.