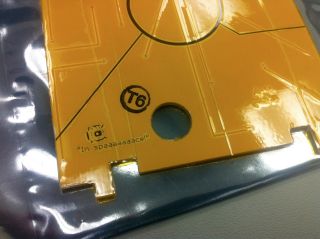 A photograph of the laser-engraved panel with the “Portal 2” video game’s "Wheatley" character and inscription "In spaaaaaaace!" that was launched aboard JAXA’s H-II Transfer Vehicle (HTV) on July 20, 2012, to the International Space Station.
(Image: © Valve)

An American video game company has revealed there is an unauthorized stowaway on board the Japanese spacecraft now in Earth orbit on its way to the International Space Station (ISS).

"Wheatley," the orb-shaped robotic companion from Valve Software's 2011 popular game "Portal 2," is flying aboard the Japan Aerospace Exploration Agency's (JAXA) latest H-2 Transfer Vehicle, the HTV-3, which launched on Friday (July 20) to resupply the space station. The character, in miniature two-dimensional form, is soaring through real space thanks to an unnamed NASA worker.

Valve announced on its website's blog that "thanks to an anonymous tech at NASA, Wheatley is actually going to actual space."

The one-eyed sphere, or "personality core" as referred to in the video game, is given its voice by English actor and comedian Stephen Merchant. On board the HTV, which is nicknamed Kounotori or "white stork", the robot's voice is offered in the form of a phrase engraved under Wheatley's likeness — "In spaaaaaaace!"

(Portal 2 players may associate that quote with another of the game's personality cores, the so-called "Space Core," though Valve attributes it to Wheatley on their blog.)

A photo posted on Valve's website shows what appears to be a circuit board with Wheatley's likeness laser-inscribed in one corner. The photograph offers no reference of scale for the component, nor from what instrument it may have originated. [9 Weird Things Launched on NASA Shuttles]

NASA has several scientific experiments and payloads on the HTV-3, which astronauts will unpack after capturing the spacecraft using the space station's robotic arm and then attaching it to the outpost on Friday (July 27). Among the U.S. payloads are an Earth-observation camera, two small satellites, and a communications and navigation test bed.

The lack of details may be because the Wheatley etching is unofficial.

"And please note that when we mentioned an 'anonymous tech at NASA' we weren't kidding," Valve explained on its blog. "NASA in no way officially endorses secretly laser-engraving characters from Portal onto their spacecraft."

"Believe it or not," the software company continued, "they don't even officially endorse Portal 2, despite the fact that it's a really excellent game."

As a U.S. government agency, NASA cannot promote or endorse commercial products. It has partnered with other entertainment and game companies in the past, including Disney and Rovio, the latter makers of the "Angry Birds" mobile games, but those collaborations were to use their characters for educational outreach.

Portal 2 challenges the player to solve a series of puzzles using a "portal gun," that opens entrance- and exit-ways (portals) through walls and other flat planes. Wheatley, as the slow-witted companion, helps players as they navigate the game's futuristic setting.

While there are no portal guns on JAXA's Kounotori-3, there are 7,000 pounds (3,175 kilograms) of supplies and equipment for the station's Expedition 32 crew. In addition to the NASA experiments, JAXA's own payload includes an aquatic habitat for fish and a cooling water pump.

This is Japan's third resupply spacecraft launched to the International Space Station. After about a month attached to the complex, the HTV, re-loaded with trash, will leave the orbiting laboratory to re-enter into Earth's atmosphere and be destroyed.

Wheatley, however, will remain "in spaaaaaaace!"