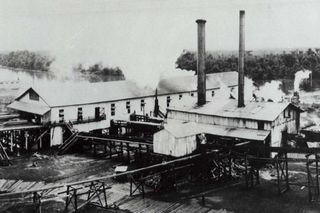 Once the largest sawmill in the U.S., H. Weston Lumber Co. stood where Stennis Space Center is now.
(Image: © NASA.)

In this historical photo from the U.S. space agency from January of 1928, the H. Weston Lumber Co., founded in 1848, was said to be the largest in the United States. The huge sawmill was the hub of activity and employment in the community of Logtown, one of five communities that existed where Stennis Space Center is now located. The lumber company finally closed in 1928.

In October 1961, the federal government announced its decision to locate a national rocket test facility in Hancock County, Mississippi. The towns of Logtown, Gainesville, Westonia, Napoleon, and Santa Rosa and their residents had to be moved to make way for the NASA center.