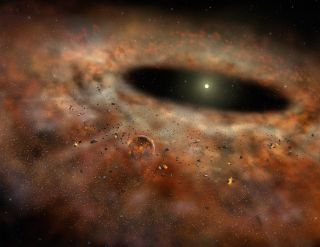 Artist's concept of the dusty TYC 8241 2652 star system as it might have appeared several years ago, when it was emitting large amounts of excess infrared radiation.
(Image: © Gemini Observatory/AURA artwork by Lynette Cook)

A dusty disk around a distant star has faded surprisingly fast, leaving scientists few clues to how it disappeared.

Only a few years ago, the space around the star TYC 8241 2652 1 was filled with dust and gas, but recent observations show the region — an ideal spot for alien planets to form — has all but vanished.

"It's like the classic magician's trick: Now you see it, now you don't," principal investigator Carl Melis of the University of California, San Diego said in a statement. "Only in this case, we're talking about enough dust to fill an inner solar system, and it really is gone!"

The star is 450 light-years away, in the constellation Centaurus. At 10 million years old, it is a younger version of our 4.5-billion-year-old sun.

Tiny specks of dust orbiting a star absorb its energy and shine in infrared light. As the glow brightens and dims, astronomers can estimate how much material surrounds the star.

The disk around the star TYC 8241 2652 1 was discovered in 1983 and  remained relatively constant for 2 1/2 decades. Scientists estimated that 1,000 trillion grains of dust — the equivalent of all the sand on the beaches of Earth — circled this younger version of our sun.

Observations by the Gemini South telescope in Chile and several other instruments found that the infrared light emitted by the dust had dropped by more than half. In subsequent studies, the amount of dust around the star had all but vanished, dropping by a factor of nearly 30 in two years.

Such a dramatic change is astonishingly fast when compared to the million-year time scale of most astronomical events, researchers said. [Top 10 Star Mysteries]

"The dust disappearance at TYC 8241 2652 1 was so bizarre and so quick, initially I figured that our observations must simply be in error in some strange way," said study co-author Ben Zuckerman of the University of California, Los Angles.

The quickly vanishing disk may help scientists better understand how planets formed in early solar systems, including our own, researchers said.

The case of the disappearing disk

The amount of dust around a star rises and falls over time. After a star forms, young planets are created from the leftover debris, known as a protoplanetary disk.

But the early life of a solar system is typically a time of violent collisions, so while much of the dust is initially swept up in the creation process, the disk is repopulated as large chunks of rock crash into one other. The disk around the 10-million-year-old star was thought to be in this second stage, with rocky objects constantly smashing together.

Where did the dust disappear to so quickly? Two different theories have been advanced to explain what caused the sudden loss.

The first model suggests that the dust fell into the star, while the second proposes that the explosive impacts could have blown much of the dust completely out of the system.

The second theory, known as the collisional cascade model, would likely require time scales longer than two years to clear the dust from the system, researchers said.

But there's still a nagging mystery. Neither of the two theories clearly fits the evidence obtained by observations of TYC 8241 2652 1.

"A perplexing thing about this discovery is that we don't have a really satisfactory explanation to address what happened around this star," Melis said.

The findings were published online today (July 4) in the journal Nature.