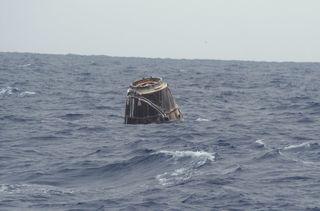 WASHINGTON — A key congressional critic of NASA’s commercial crew acquisition strategy has backed away from his insistence that the agency truncate the ongoing competition and proceed immediately with the selection of a single contractor.

As chairman of the House appropriations subcommittee that funds NASA, Wolf authored a spending measure calling for the agency to immediately narrow the field of commercial crew competitors, either by picking a single provider now or adopting a so-called leader-follower strategy where the bulk of the money goes to the most promising company.

The spending measure — the 2013 Commerce, Justice, Science Appropriations bill (H.R. 5326) approved May 10 in the House — also rejected NASA’s request for $830 million for the Commercial Crew Program, providing just $500 million for a condensed effort. Companion legislation now before the Senate would provide $525 million for commercial crew.

"I remain convinced that the approach outlined in the committee’s report is the most appropriate way forward for the program," Wolf said in a June 5 statement. "However, in an effort to prevent any disruption in the development of crew vehicles to return U.S. astronauts to ISS as quickly as possible, I have reached an understanding with NASA Administrator Charles Bolden in an exchange of letters that will allow the upcoming Commercial Crew Integrated Capability (CCiCAP) phase to proceed under a revised, more limited management roadmap and with an [sic] fiscal year 2013 funding level at or near the Senate Appropriations Committee approved amount." [Top 10 Private Spaceships]

In a letter to Bolden dated May 31 — the same day commercial crew contender Space Exploration Technologies Corp. completed its historic cargo-delivery demonstration mission to the ISS — Wolf outlined several elements of this revised approach, including:

Bolden, in a June 4 letter to Wolf, confirmed those and other points and made an appeal for more commercial crew money.

"I would emphasize that it is very important that the final FY2013 funding for the [Commercial Crew Program] be as robust as possible," Bolden said. He said a final appropriation closer to the president’s request is "highly desirable, in that it will increase NASA’s ability to deliver the safe and effective program we both wish to see accomplished."

Bolden added that even more funding will be required in later years to effectively carry out the commercial crew plan.

"I had previously called for NASA to down-select from four potential providers to the top two firms," Hutchison said in a press release. "Today’s announcement follows that prescription and is welcome news."

Rep. Dana Rohrabacher (R-Calif.), one of the more outspoken commercial crew advocates in the House, issued a statement praising the compromise.

"I am pleased that [Commercial, Justice, Science] Appropriations Chairman Frank Wolf and NASA Administrator Bolden were able to come to an agreement ensuring that the Commercial Crew Program will move forward quickly while preserving competition in the program," Rohrabacher said. "This leadership will help bring about safe, reliable, domestic access to space for our astronauts on commercial vehicles, saving money, creating jobs in America, and leveraging our greatest strengths to maintain our international leadership in space."