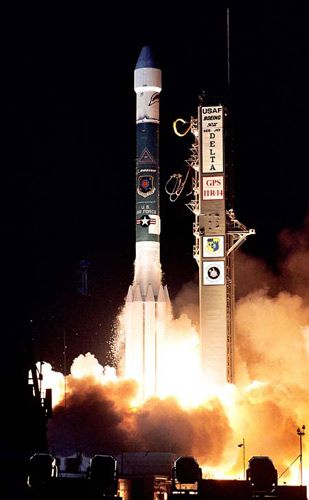 Following a smooth-as-silk countdown,the blue and white rocket shot off Cape Canaveral's pad 17A at 11:37 p.m. EDT(0337 GMT) trailing a plume of blinding flame. Night owls as far away as Miamispotted the launch.

The two-ton GPS 2R-M1spacecraft rode its three-stage launcher into a temporary, looping orbitstretching from 150 to nearly 11,000 miles where the Delta successfullyreleased its payload nearly 25 minutes after liftoff.

Ground controllers willspend the next several days guiding the $75 million satellite to its final destinationby firing an onboard kick motor to raise the orbit's low point. Thepower-generating solar panels will be deployed and antennas unfurled during thecritical early days, too.

If all goes according toplan, a separate mission control team takes over Friday to commence anextensive four-month test regimen that will put the Lockheed Martin-builtsatellite through its paces.

GPS 2R-M1 begins a new breed of updated GPS satellites that will not onlybroadcast the navigation signals as previous spacecraft but also provide twonew military signals and a second civilian signal. Those improvements promiseto bring greater accuracy, added resistance to interference and enhancedperformance for users around the world.

"I think this is apretty huge step. We have essentially been operating on the original-designsignals of GPS for over a decade, and this is going to be the first time we areactually adding new signals from space," said Col. Allan Ballenger, GPSsystem program director at the Space and Missile Systems Center.

"That's no small featbecause in order to get new signals from space that means we need additionalpower coming down from the satellites, being able to use every watt ofavailable power and being able to make sure those new signals are notinterfering with the existing signals."

Ensuring the new signals donot cause problems will be a key focus during the next four months of on-orbittests.

"Onepart of our responsibility that we take very seriously is what we callbackwards compatibility -- making sure while we are modernizing and adding newsignals for both the military and civil customers we're not introducinginadvertent problems for those users out there already with their GPS receiversacross many hundreds of thousands of DoD platforms, coalition partner militaryplatforms as well as millions of civil users -- things like OnStar, what'sembedded in cell phones as well as automobiles. We want to be very careful tomake sure that we don't do anything to (mess) those up," Ballenger said.

Lockheed Martin has built21 of the GPS 2R satellites for the Air Force, of which 14 have now launched.Five years ago, the military decided to add the modernization features to thefinal eight spacecraft in the series.

The second modernizedsatellite will be shipped to Cape Canaveral later this year for launch in early2006. The exact launch date depends on the results of the GPS 2R-M1 testing.

The spaceborne networkfeatures 24 primary and several backup satellites flying in six orbitalgroupings. The Air Force began launching the fleet in 1989 and continues tosend up new satellites as replacements to keep the navigation system in goodhealth. There are 28 functioning GPS satellites today.

GPS 2R-M1 will assume thePlane C, Slot 4 position, taking over for the GPS 2A-20 craft launched in May1993. The aging satellite, although still operational, will be repositionedwithin the GPS constellation for the remainder of its life. The new slot forthe old spacecraft will be determined later.

The Air Force is expectingto deploy three new GPS satellites next year. Getting multiple modernizedspacecraft in orbit is necessary to reap the benefits of the new signals bycovering more of the planet at any given time.

"At our currentprojected launch rate, which is between two and four satellites a year, thattakes us out some number of years before we actually populate the fullconstellation. Obviously, one satellite will give you only several hours ofcoverage to a particular receiver. As we launch more and more satellites, thatcoverage will improve over time," Ballenger said.

"On the military side,we're also looking to modernize user equipment for military users to takeadvantage of the military code. But that will involve making modifications inships and tanks and planes."

Ballenger said somecivilian receivers already on the market can pick up the new signal, whileolder units will have to be replaced.

Millions of people acrossthe globe use GPS every day, and that commercial marketplace for GPS technologyhas exploded in recent years, growing from $16 billion in 2003 to what analystspredict will be $68 billion in 2010, said Michael Shaw, director ofradionavigation and positioning at the U.S. Department of Transportation.

"We are seeingcontinued growth in precision civilian applications such surveying, precisionagriculture, infrastructure monitoring, geodesy, as well as volcano andearthquake research. More specifically at the Department of Transportationwhere I work, we are expanding our applications across the entire U.S.transportation infrastructure," Shaw said.

"The bottom line --GPS is absolutely critical to our nation's economic well being."

"We have the mostrobust and capable global positioning system in the history of space. Thenavigation and timing signals our GPS satellites provide have changed the faceof war, enabling precision operations and more importantly saving lives byhelping minimize collatoral damage. GPS has also spurred on an internationalmulti-billion dollar civilan and commercial market for a variety of GPS andtiming applications," Ballenger said.

"We are starting on ajourney of one satellite at a time."

While the new series hasjust begun to fly, the Air Force has the next generation already in the works.The GPS 2F satellites are under construction at a Boeing plant in California.They will feature the original and the new modernized signals, plus offer athird civilian signal of particular interest to the aviation industry. A dozenof those satellites will be built, with the first launch anticipated in 2007from the Cape.

Sunday's launch was the53rd for a GPS satellite and the 42nd carried on a Delta 2 rocket.

For Boeing's workhorsebooster, it marked the 118th successful Delta 2 rocket launch out of 120flights since 1989 and extended the string of consecutive successes to 65dating back to 1997.

The next Delta 2 rocketlaunch occurs from California's Vandenberg Air Force Base around October 26carrying the CloudSat and CALIPSO environmental satellites for NASA. The nextDelta 2 from Cape Canaveral will be early next year carrying either GPS 2R-M2or the MITEX experimental military satellite for the Defense Advanced ResearchProjects Agency.