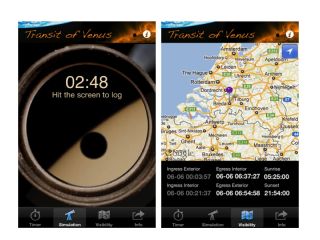 On June 5-6, amateur and professional astronomers alike will be treated to a very rare celestial event: the trek of the planet Venus across the sun. Of course, there’s an app for that.

Called VenusTransit and available on both the iOS (iPhone) and Android platforms, the app recreates a centuries-old experiment that was used to help calculate the size of the solar system, specifically the Earth’s distance from the sun.

The transit of Venus across the sun is one of the rarest celestial events ever witnessed in human history. Only six Venus transits have been observed in the last 400 years, and if you miss this one, you're out of luck. The next transit of Venus occurs in the year 2117.

That's where the VenusTransit app comes in.

The skywatcher society Astronomers Without Borders and Dutch schoolteacher Steven van Roode are behind the app. Users of VenusTransit are asked to use a built-in timer within the app to calculate the length of the “ingress,” or entrance, of Venus' shadow onto the solar disk, and the “egress,” or departure, of Venus’s shadow from the face of the sun. [NASA Launches App Competition]

The app combines that info with location data from the phone itself and sends it to a central server. The app’s creators hope to see whether the data gleaned from amateur astronomers can be as accurate as those of 18th and 19th century stargazers who did the same experiment with far less precise instruments.

Astronomers who watched the 1874 and 1882 transits were able to determine the distance from the Earth to the sun to within 1 percent of its actual value.

VenusTransit has three sections: a timer, a simulator and a visibility section, which tells you when the Venus transit should occur in your location.

If you would like to participate, be sure to read this description of the app and familiarize yourself with the methods of timing the transit. From there, use the simulator to practice timing both the ingress and egress, and compare your times to the correct time to gauge your accuracy. (Note that the app has locked out the timer portion until the time of the actual transit to prevent bogus entries.)

Following the transit, data collected will be posted to an interactive map on the Astronomers Without Borders website. Roode says he hopes the site will become a “time capsule” for future descendants to look back on the events of the Venus transits of the 21st century.

This story was provided by TechNewsDaily , sister site to SPACE.com.